Hey there. You imported the code into visual mode, it seems, meaning the code is treated as raw text and not the actual code. I went ahead and fixed it for you! Additionally, I renamed your page to just "Irla" per the wiki's article naming policy.

^^^^ This mission, operation: fix the template, is to never be spoken of again

Possibly.  The visible source code for the template looks fine, though.

Yeah, I have.  If you look at my sandbox there's a weird gap between "Ranger-Lieutenant" (first line in the intro paragraph) and the left side of the page. A similar issue appears on Berenal's page, however the gap is on top, making the first line of the intro para not lining up with the top of the infobox.

I tried messing around in both source and visual editor to make the gap near the first word go away and go elsewhere, but it still leaves a gap between the end of the intro paragraph and the Table of Contents section, and also messes the lineup between the top of the infobox and intro paragraph.

I think it is from the spell-checker though even then that means there's some type of gap that it's seeing as "mispelled", it's not a visual glitch.  When I click on it it even looks like it's an extention of the template.  Here's a screenshot of just the template on a page with no other text (source-checked), that proves the issue still appears. 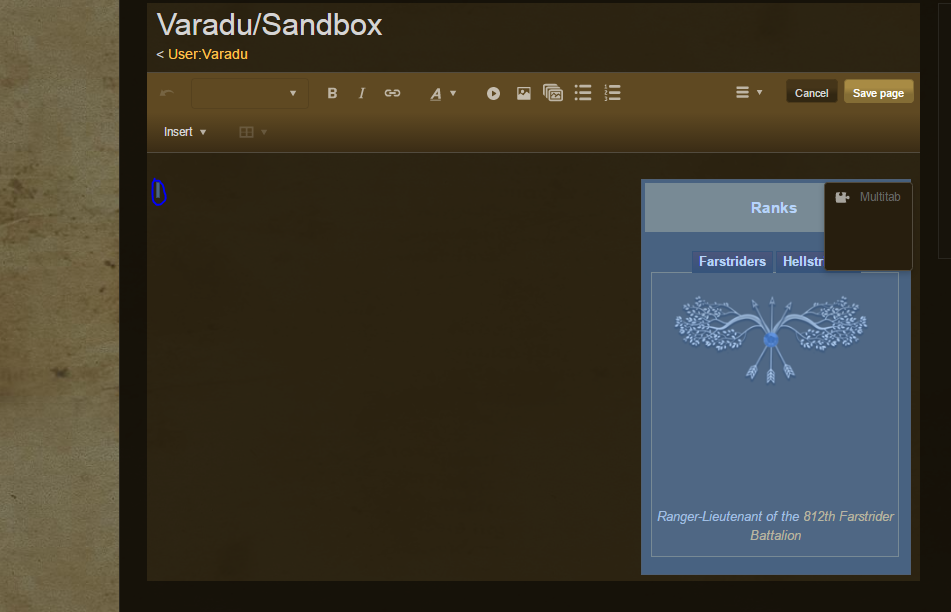 Recently I was helping my friend fix his page as he evidently deleted his multitab box on accident - but, in doing so I figured out there's a weird problem with the template.  It seems to be "bigger" than it's supposed to be, putting a weird red "~" some lines above the actual template messing up text placed above it.

Here's a screenshot: (forgive the messy pointer, only did a quick MS paint edit to show)

(edited by Varadu)
A reply to Classic Berserker
0

Your edit is still there, however mobile viewing after you edit from mobile can be a bit funky. You're good though, it's still there and should show up if you view from desktop. If you want to see the edit from mobile, though, try reloading the page.

I wasn't aware you minded, my apologies.

There's various coat of arms makers, you can look on Google.  And mottos normally just take some brain storming lol.

Ah, okay.  Most the time, the Blood Elven side remains fine with the Horde and Quel'Thalas, and the High Elven side goes to Alliance and usually no longer consider themselves noble given their lands are Horde territory.

OR their original lands gets fucked up by the Scourge and neither of them have it, but typically the New Horde's Blood Elven forces liberate them, however it's possible - if they have enough support - the High Elven side can take back their lands and make it Alliance territory with a de facto Alliance-aligned "Quel'Thalas".

Yeah, that is normally the case.

That's possible.  Taliera could've seen Sera as an 'abomination' after being turned to a Blood Elf or something of the sorts and basically disowned her, not to mention they're of two different political factions which only until the end of MoP were brutal enemies.  They still are, however it's not as bad as it was when Garrosh was Warchief.  Even then though, they're still not allies — politically, at least.

I have a question, though.  How is Taliera still involved with Dawnflame's noble dealings now that she's no longer of the New Horde's Quel'Thalas?

Ahh okay.  Are the High Elves Alliance-aligned or did they somehow stay with the New Horde?

And imo that term is fine haha.

Hmm, well, one thing that'd come to mind is that given they were known to be primarily Priests they could've been granted noble land for their service to that, etc.

If you want the house to be one of the oldest houses of Quel'Thalas, perhaps then go with them being one of the first noble houses that King Dath'Remar appointed in the initial founding of the Kingdom of Quel'Thalas.

Checked out the page — looks pretty good. I'd be happy to help with whatever. What part about the history are you having trouble with?

I truly believe this is a substantial advancement in the development of the Moon Guard Wiki.  I do believe the content of the wikia will be vastly more enjoyed given the new back drop and color scheme.

My personal thanks to Maxen and the Administrative Board for this amazing update, and I believe that mine -- and everyone else's -- articles will be presented much better.

If you're interesting in an SI:7 Roleplay, any type of Rogues or Hunters would fit great into <Division Bravo>!

And for guilds again, here's a list of some guilds you may want to check out (Other than the one I run, listed above.):

<Lightwardens> - Another Light-RP guild, they have some differences opposed to the COTHL, though they're all connected in the Council of Bishops project.  (GM:  Melchiz)

<The Highguard> - High Elf RP, a bunch of stuff over there regarding Quel'dorei. (GM: Aeriyth)