Moon Guard Wiki
Register
Don't have an account?
Sign In
Advertisement
in: Stormwind Circle of Magi, Magocracy of Dalaran, Kirin Tor,
and 10 more

Venerable and ancient, Sir Aetyleus the Elder (Born Aetyleus of the House of Ardalan) is an Archmage of the Kirin Tor and former Conjurer of Stormwind. Renowned as a brilliant scholar within the magical and alchemical community, Aetyleus' wisdom, guidance, and counsel is often sought by the leaders and magi of the Grand Alliance and the Magocracy of Dalaran.

The Archmage is typically adorned in the formal and traditional wears of the older generations of magi, which consists of long flowing robes and a conical hat accented with a shirt, tie, dress pants, and polished shoes crafted from the finest colored fabrics and leathers Stormwindian artisans can acquire. Aetyleus keeps many of his personal keepsakes, trinkets, and other reagents stowed away on his person for if their need should ever arise. It would be an incredibly rare sight to witness the veteran wizard without his signature conical hat as it was one of his most prized articles of clothing. On his left ring finger, where one would normally wear a wedding band, instead rested an old bronze Kirin Tor Signet Ring, a parted gift from a dear friend and Magocracy Senator from times since passed.

A veteran of some of humanity's greatest conflicts, Aetyleus was no stranger to horrors of warfare having helped defend both Stormwind and Dalaran for the better part of his life. He was confident, but often reserved, and always seemed to know where best to strike his opponents for maximum effect. Upon engaging in combat, the Archmage's first action is to summon the aid of his Arcane familiar, Granius the Watcher, to intercept foes and keep them occupied and therefore allow himself to cast spells or use other abilities without interference. If the Archmage appears to be winning the engagement after the first few exchanges in combat, he will press the advantage with devastating area-effect spells. If he thought he was losing, however, Aetyleus would not hesitate to teleport hastily back to safety to fight another day.

Conscripted as a footman shortly after his Age of Ascension by His Majesty Barathen Wrynn, King of Stormwind during the Gnoll War, Aetyleus is remarkably old and surpasses even the most liberal of standards for humanity’s otherwise short documented lifespan. Having noted some powerful magi are capable of extending their lives through the use of Arcane Magic, it is suspected that the Archmage has spent considerable portions of his life researching and understanding the young field of research and phenomena known as Chronomancy.

His pale complexion could probably be used as a mirror to those who got close enough, his eyes laid sunken within their sockets and dull in appearance. The elder stood a measly five-foot seven-inches with a slight hunch. His forehead was decorated with deep wrinkles when he spoke and gestured, rising and falling like the tide of the sea. The man carried no obvious weaponry other than his staff which doubled primarily as a walking aid that the Archmage came to rely upon greatly for quick mobility due to an old injury leaving him with a noticeable limp in his left leg; when without, his arms were often crossed in his robes concealing both hands.

While it has been confirmed that the mortal Archmage bears no relationship to the Bronze Dragonflight, his colleagues remain unsure on how he came in possession of a few grains of the Sands of Time from the Northrend shrine; a secret one has never cared to share to even his most trusted friends and apprentices. These sands, as white as undriven snow, allow the Archmage the remarkable and most extraordinary ability to scry enigmatic glimpses of the past and future, and even alternate timelines, and may hold the secret to his otherwise unorthodox age.

1. Aetyleus has co-authored several publications regarding magic: (1) De Magia Volume I, (2) Transmutation: Key within the Stone, (3) Arcane Medium: A Study of the Spell Focus, (4) The Violet Grimoire, as well as one pamphlet: Robes and Wardrobes.

4. Declared an 'Honorary Dwarf' by Dwarven Vanguard Captain Drarin Thundersteel, Aetyleus has been known to equip and fund many archaeological digs related to Dwarvish lore, as well as the prominent Blacksmith organization known as the Mithril Order. The Archmage fluently reads, writes, and speaks the Dwarvish language as well as the various dialects. Two years later, Thane and Field-Marshal Bromas Ebonram reaffirmed the title with full honors.

5. Aetyleus is also the proud second place winner of the Steamwheedle Cartel Gadgetzan's 37th Annual Sandcastle Competition. He is also recognized as a Grandmaster of the popular strategy board game Hawks and Hares, as well as Chest. His Hearthstone prowess, however, is rather adept at best.

6. The Archmage has a zealous obsession with pointed hats, and very rarely takes his own off giving rise to the rumor he even bathes with it on.

7. Establishing himself as a subject-matter expert of Necromancy following the betrayal of Kel'thuzad and the emergence of the Cult of the Damned, the Archmage sometimes provides lectures and demonstrations under extremely strict guidelines and a watchful eye for the more disciplined and mature magi of the realm, something he believes will help prepare them in their defense against the foul magic should the necessity ever arise in the field.

8. Aetyleus is the co-owner of a deliciously famous restaurant known as Eventide Pizzeria with locations in Dalaran, Stormwind City, Boralus, Ironforge, and Gadgetzan! Additionally, the Archmage also co-owns a small yet successful ranch dedicated to the breeding of only the most capable and pureblood of Barak Tor'ol mountain rams located in Khaz Modan.

10. Aetyleus fluently speaks Common, Dwarven, Thalassian, and has a proficient understanding of Gnomish, Darnassian, Draenei. The Archmage has an academical understanding of Orcish, Shalassian, Kalimag, Draconic, Titanic, and Shath'Yar.

11. A connoisseur of mushrooms, mosses, and other fine fungi, the Archmage can often be found foraging the nearby woods for delectable treats. 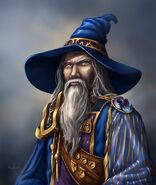 The Archmage dressed with full awards and honors after a lifelong of service, by DayPaintStudio.

Alternative sketch of the Dark Portal during the Burning Crusade, by DayPaintStudio. 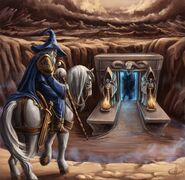 Aetyleus killing a Warlock during the third Legion invasion - the battle over Karazhan, by DayPaintStudio.

The cabinet of the Magus Senate of Dalaran in 40 L.C., by DayPaintStudio.

Aetyleus after one too many hits of ketamine, by Cwakaelandelayo.

Officers of <The Royal Arcanum> render, by Aetyleus. 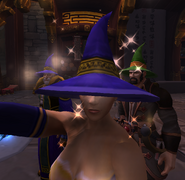 Chancellor and Vice-Chancellor appointing Candun Greyson to Minister of War.

Aetyleus assuming the mantle as Vice-Chancellor of the Magus Senate of Dalaran.

The Battle of the Bones.

The Chancellor at Ambermill with the Senators.

An Alliance with the Wildhammers and Stormpikes is reaffirmed.

Signing of the Baradin Accord. 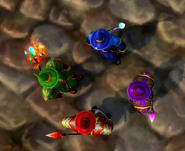 The full cabinet of the Magus Senate of Dalaran. 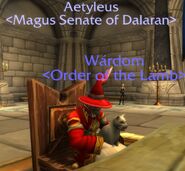 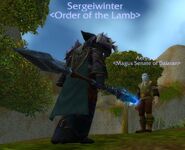 The Magus Senate at the Stormwind House of Nobles.

Aetyleus reading the charges of Private Olathor Stoneshield prior to his flogging and rank suspension.

The Regiment on the march.

The Magus Senate comes together for a meeting.

Aetyleus meeting with the Magus Senate Chancellor, Vice-Chancellor, and General. 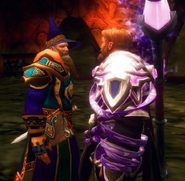 Archmage Aetyleus and Magus Garion Magnus face to face in the heart of Blackrock Mountain.

The First Regiment called to formation.

The Awards Ceremony following the campaign.

After being lost at sea for five months, Magus Berdredi returns on the verge of death.

The Archmage with Magus Cylus Baultry.

Preliminary Grand Alliance meeting prior to the Conquest of Zandalar. Aetyleus stands inner-circle with the commanders of the Grand Alliance.

A lesson at Azora.

Aboard ship preparing for the invasion of the Ghostlands.

The Archmage teaching a class on Runic Magic.

The Arcanum searching the caves of Dustwallow.

The Stormwind Circle in the Swamps of Dustwallow.

The Arcanum facing Ammit, guardian of the sanctum.

The Stormwind Circle in Uldum looking for treasure and relics.
Community content is available under CC-BY-SA unless otherwise noted.
Advertisement