Alexandrene Bexley is a noblewoman, arcanist, and horse breeder sworn to the service of Queen Madelynne I. Hailing from Arathi, her House has since been displaced and she currently resides in an estate in western Redridge.

Alex could be described as naturally pretty with her dark features, full red lips, and clear as glass blue eyes. She has smooth, silky black hair that falls in long loosely-curled tendrils upon her shoulders and down her back. Her slender frame stands tall and upright, and what few curves she may bear come from the small muscles that are riddled throughout her body.

Her countenance is one of a friendly, relaxed nature when she is conscious of those around her, ever mindful of her appearance when in the company of her peers. In a rare moment where her guard may be let down, a sullen, dark, weary expression might be written upon her face.

Her gentle features and delicate movements give the impression of a life without labor, though a few minor details may stick out under a more attentive eye. Her hands are rough and calloused, and as so, often remain hidden beneath richly textured gloves. Her satiny skin still has the freshness of youth, a healthy glow beset upon a deep natural tan. A glimpse of a tattoo or two may stick out from under her clothing, though most would be hidden if she could help it.

Her clothing mostly involves intricately woven robes of a more revealing nature, and she has a preferance for rich, bold colors. Around her neck is a thin-band of a black choker necklace. Her movements are guided with purpose, and she displays the proper mannerisms and gracefulness of a woman of nobility.

This will probs never happen either. 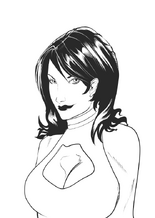