Aman'talah's sleek blue design is inspired by a Troll Wars era Thalassian era spellbow recovered by Entilzha Firesong while leading the Curators of Thalassian Culture. Aman'talah merges the traditional runic and design elements of the original, with a faster modern firing system, and bears the elegance of a time long past, and the lethality and versatility of a finely crafted, modern Thalassian weapon.

The weapon from which much of Aman'talah's stylistic elements, and a portion of its runework, was inspired by, was found in a partially submerged chamber off the Isle of Quel'Danas.

The original bow upon which Aman'talah was based dates, based on sediment levels and residual arcane dating, to approximately 4,000 Y.S. on the Thalassian Calendar, the time of the troll wars. Due to the sophistication of the weapon, with three primary and two augment runes, its thought to have been crafted later in the war as Thalassian bows grew more elaborate and powerful.

The original spellbow, which has no name associated with it, is displayed at the Sun's Lineage Gallery as "Troll Wars Spellbow" and three primary and two augment runes.

The sleek and ornate, five-runed weapon was of the more sophisticated elven weapons created during the Troll Wars, likely having been forged near the conflict's end. As the ornate and impressive design of Aman'talah becomes well known among the convergence of forces in Suramar, especially given that its use by a Nightborne is uncommon and with Calindra's skill and Aman'talah's impressive design and capacity, one that makes an impression even from a distance. More visitors to the gallery recognize the design as the inspiration of Aman'talah, which has since led to more spellboyers seeking to study the original and develop further replicas than the three commissioned by House Firesong.

The original design has an odd upper rune which seemed to generate an amber effect, which upon further testing revealed if used by one infused with the light, the design fired arrows of holy fire.Two smaller augment runes to the primary conjuration rune allow the wielder to shoot 1-3 arrows, on fire if desired.

The design may have ancient roots, or may have been designed for a specific ranger. With the advent of Mage-Priests and few lightwielders also using a spellbow, while one precise replica was made, three more commissioned by House Firesong replaced the Light rune with a standard flame rune.

The Original bow from which Aman'talah was designed is held at the Sun's Lineage Gallery on the Isle of Quel'Danas and was dated to approximately 4,000 Y.S (Thalassian Calendar), corresponding with the later stages of the Troll Wars and displaying increased sophistication and wielder control than models from before and earlier in the conflict. With arcane seals preventing damage to the original despite being in a partially submerged chamber, House Firesong sought the finest spellbowyers and runesmiths in and from Quel'Thalas

Aman'talah was financed by House of Firesong along with two other variants of the original weapon. In the case of Aman'talah, the Light rune was replaced with a more traditional fire rune, allowing a wielder to fire up to three flaming , conjured arrows in a volley. The fire rune calls upon unique leyflows and burns very hot when activated, enough so to melt many forms of armor, and does not require one with an affinity for Light Magics to fire; base arcane levels in Thalassian populations are suitable for activation of the bow.

The second replica replaced the Light rune with a frost one, while one of the three Firesong replicas was designed to be near identical to the original, with the "holy arrow" capacity. Only Aman'talah has been seen in combat, thouh the others are known to have been completed, and are likely held among House Firesong's armaments and arcane collection.

Calindra Lemoine was gifted one of three spellbows upon her promotion to Ranger-Lieutenant of the Thera'dora by Lord Firesong. Calindra had been a civilian before the war, and freed from Felborne cages en route to the Azsuna soul forces, she was one of the five first Thera-dora trainees. Calindra displayed a deep affinity for nature while training with Thalassian Farstriders, and took to training with a bow over a sword.

Calindra was instrumental in the raid which freed Captain Adrienne and five Duskwatch holdouts sheltering nine civilians, refusing orders to deliver the citizens to Astravaar Harbor for transit to the Soul Engine. Her rooftop Thera-dora played a vital role in diversion of encircling loyalists to allow the mostly Thalssian ground team to reach the wards guarding the door. They weren't however, able to convince the weary Duskwatch Captain to let them in before the Felborne had summoned a colossal infernal.

The Thalassian ground team, rooftop Thera-dora, and the soldiers, even some of the civilians freed from the building, fought the monstrosity before it could destroy half the terrace, its core shattered by one of the arcane-tipped arrows Calindra had been using. Captain Adrienne and her team provided critical experience to the Thera-dora, which had been growing in numbers as refugees soared, but deeply required more with the experience to train them. Calindra herself, now a Ranger instructor, was at the time still herself learning, but her skill, tenacity, sense of timing and coordination was proven beyond measure, and Calindra was the first Thera-dora promoted, to the rank of Ranger-Lieutenant.

Entilzha Firesong saw that Calindra receive one of the finest spellbows from Quel'Thalas, both to make the most of her own skill, encourage confidence and inspiration for trainees. Entilzha had three spellbows selected for Calindra to choose from. Of these, one was a modern design, another a variant of the ancient bow which fired ice arrows, not flame. Calindra said Aman'talah "felt right" in her hands, and though Shal'dorei, named the weapon according to Thalassian custom, while striking down those harassing the weak on rooftop patrol in occupied Suramar City.

Calindra now Ranger-Captain of the Thera-dora and tasked with the daunting challenge of defending a domeless Suramar and reclaiming wilderness areas near the city, has been seeking additional replication or augmented replication of the design, seeking variation in both design and style.

The request received financing from Houses Devaux and Firesong, and expertise in spellbow design from Quel'Thalas, a series of bows based on the design of Aman'talah is being designed, as the Thera-dora take on the role of a ranger force for Suramar, much of the training and execution handled by Calindra. Each new bow is different, with runes and a design suited to the Ranger. Increasingly, the ranger and spellboyer work in tandem on perfecting designs to suit their personal talents and needs.

Few of the second-wave replica weapons reach the level of master craftsmanship displayed in Aman'talah and its origin piece, with Calindra opting to focus more on function over style for the general Thera-dora bows. Two dozen spellbows in production are being designed from both Aman'talah and the base model on Quel'danas, and are likely to be assigned to officers, or particularly skilled archers among the Thera-dora.

As with nearly all spellbows, Aman'talah is dominated by a central conjuration rune, with two, smaller augment runes, the activation of which enables Calindra to choose whether to fire one, two, or three arrows. Arrows are typically conjured before activation of the upper flame rune, at which point they can be fired by releasing the quiver, though the lower rune permits the bearer a degree of arcane guidance over the arrows, not able to lock onto a target, but able to instruct the weapon to, for instance, have the arrows turn to the right 20 yards after firing.

This unpredictability, which is unclear if it was an intended function of the original design, but Calindra has found great use for it in keeping foes off balance. One arrow charged with the full fire potential of the upper rune will burn far hotter than three, and often in armor piercing situations, Aman'talah will be fired with a single arrow, while volleys are more common against less heavily armored, or in the case of demons, many of the weapon's victims, extremely think skin. 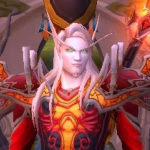 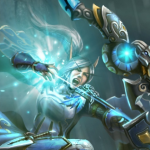 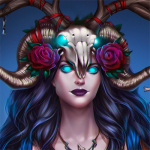