Burchard Sigeric Hillegas is a Lordaeronian soldier. He is an aspiring knight, and one of the last surviving members of House Hillegas. He is taking strides to reclaim his ancestral lands of the Duchy of Zollern, in the former Kingdom of Lordaeron and to rebuild what little remains of his House. Currently, he serves Lord Alexander Grayson of The Eastern Pinnacle as a soldier, though he has been branching out independently.

The middle-aged Mercenary is seriously beginning to consider his adult life, though still brash in his decision making and is more an impulsive risk-taker than he is a cautious thinker. Often times, he is quick to anger as he subconsciously clings to the ways of a younger kid who could get rough, and tumble with up-and-comers in society. He doesn't take kindly to insults, nor being ignored during times of crises.

Inter-personal relations are all but non-existent with Lord Hillegas. Growing up, he relied on his family for advice and nurture. He never got to branch out and explore the world, as the family that fled from the Scourging of Lordaeron became rather isolationist in nature. He is shy around topics that delve into romance or rather personal affairs, as he was brought up chaste and with strong values on virtue and honor.

When his family and friends were slaughtered in a recent mission gone wrong, Burchard returned home a changed man. He is a little quieter than usual, and is quicker to anger. He can be prone to bouts of absolute silence where he stares off with a thousand-yard stare. Clearly traumatized, it will take time before this man can open up to new people again. More so, Butch has also begun to question his belief in the Holy Light, cursing it's name and forsaking his belief in it.

Of the Holy Light, Burchard has never much been a pious man. As a sellsword mercenary, Burchard is often partaking in acts that a holy man would never do, and he has committed crimes during war, such as killing women and children, robbery and perhaps more all under the banner of being a common mercenary. He prays when he thinks it best, or when others in his company do so. He takes the Light in vain when he swears and is crass when he should instead be humble and chaste. He isn't a strong thinker, so he never dwells on what religion is really all about and just views it as a force in the world like any other thing.

Burchard Hillegas is a large man. His body is toned by a lifetime of training from survivors of the Fall of Lordaeron, the primary focus of which being heavy armor conditioning and wielding a greatsword and shield, without trouble. He wears a size sixteen boot, wide fit. His hand can palm a basketball with ease. His armor is thick and heavy, commonly made for those who would joust, but it's light enough (for him) to use as regular armor. This heavy armor is twice the weight of traditional armor worn in battle, and has reinforced plate on it's breast, arms and legs. It is rather dull in design, with a simple gorget in the front and the whole set being a dull grey with accents of green. In addition, he stands over six feet tall, and is probably closer to seven feet tall than five.

Outside of the armor, Butch prefers to wear greens and greys, or blacks and whites. His attire is often times simple rather than regal, as he has always been more humble about his appearance. He has gentle blue eyes on his warrior's face, with jet-black hair that is often combed back so it is not in his face. He sports a beard, usually, and keeps it close shaven so it does not get messed up when he dons a helmet.

On his first mission with The Eastern Pinnacle, a boiling vat of scalding hot vegetable oil was dropped directly onto his face and body. It is by pure luck and miracle that Burchard did not lose his vision. Patches of his eyebrows and even small bits of his beard have not grown back properly since, giving him a further fierce and intimidating look about himself.

Burchard Sigeric is a Hillegas. He is a direct descendent of his House's founder, Sigismund Hillegas, but now they are almost all gone, with Burchard being one of the last few from the patrilineal line. He grew up deep in the Elwynn Forest, away from popular society and relying on family members for education, training and everything else. With such an isolated upbringing, Burchard does not have many friends or allies, nor connections anywhere in the world. Over time the protectors he viewed with such reverence have grown old and died.

Butch adventures, usually, as a sword-for-hire. He doesn't advertise his family often, instead passing himself off as a hedge knight or gladiator fighter. Commonly, his bosses are of the current nobility of Stormwind, Alterac, Stromgarde, Lordaeron and Gilneas. He will fight in their armies and do their dirty work for pay, and will subtly spread word of his last name to get the name Hillegas into people's mind as a reliable one. Still, Burch would love nothing more than to regain honor for his family and take back their lands to begin his own personal, familial work. Within his ventures, Burchard sells himself off as a man who can get a job done for low pay, his heavy armor often protecting him from blows and his greatsword tempered against many a foe. He displays no great colors, just dull grey and low greens.

Once, Burchard led his House and his House's forces on a mission that was said to be a rescue attempt according to intel, on his father, the House's former Patriarch. Unfortunately, this mission was nothing but a cruel farce, and he unwittingly led most of his retainers and family into a slaughter-fest, making the uprooted family nigh-on extinct and with barely eighty men to command in strength, nearly half of which are currently wounded. It would undoubtedly take time before Butch would gain the necessary courage to muster up forces to retake his ancestral homeland once more. Indeed, recently, Burchard the Tall has felt the familiar feeling of longing for one's homeland and the homesickness that ensues. He has sought blessing from Lord Alexander Grayson, and has asked several organizations for aid in his endeavor, including the Remnant of Lordaeron. After setting off with the supplies granted by these allies of his, Burch had strayed from contact with the world at large while he had focused on his task.

Currently, Baron Hillegas is working in the Barony of Zollern to restore order and peace. He undertook a grueling campaign, marching his meager forces from Stormwind City by foot up into Silverpine Forest and Tirisfal Glades to the Barony of Zollern, and with a series of conflicts and a hard-fought siege, won back the ancestral lands. Efforts are being carried out to cure the land of any Blight and taint of Undeath with resources granted by Stormwind Cardinal Niklos Adamant and the Remnant of Lordaeron. His people are few, and his able-bodied soldiers fewer, but they are stalwart in the face of adversity and work ever onward. He has made political maneuvers to both renovate his House's land and update both his family and land's crests with simpler color schemes and design. Additionally, Burchard has drafted plans and has begun hiring mercenaries to begin the expansion of his land's borders to further consolidate his position of power in the North, and retake the full Duchy of Zollern.

Baron of the Barony of Zollern

Burchard Hillegas is the Baron of the Barony of Zollern, a small holding in the lands of Lordaeron. The land has recently been cleansed of Blight and other taint of Undeath, and hostile forces have been expelled from it's borders. The people are small in population, but Baron Hillegas recently granted tracts of land to loyal mercenaries and supporters to boost his numbers.

Burchard has gained the informal and non-legal postnomial of 'The Tall' due to his larger-than-average physique by fellow soldiers and comrades-in-arms in his several engagements he has been involved in.

Due to his hunt-turned-taming of the largest bear he had ever seen on his land, the inhabitants of Burchard's barony, and his close friends and allies, have begun to affectionately refer to him as the 'Bear of Lordaeron', both for his feat of strength with his ursine companion, and his rather imposing physical physique. Indeed, his nickname has begun to manifest itself politically, for Baron Hillegas is staunchly loyal to his territory and his allies', loyal to his people, and harbors great anger for his enemies. The man also tends to give direct and terse responses, rather than eloquent speech.

Burchard is the current head of House Hillegas, a minor noble family originally from the Kingdom of Lordaeron. The House never held much sway nor influence in the former Kingdom, but their troops were well-known in Lordaeron as fierce, dependable and hardy fighters on the battlefield. It was said that one soldier from House Hillegas could be counted as ten soldiers from any other House in the Kingdom of Lordaeron, but whether this is fact or pure propaganda is up for debate. The people that hail from the House are hearty, strong men that usually have height and strength to their advantage. They were founded long ago, almost as old as Lordaeron itself, by Sigismund Hillegas. He was said to be an honorable gentleman, noble knight, and fair leader of his lands.

There is much lumber on the barony's land, and ores in the mountains, but only a little bit of fertile land to produce crops. Thus, it was lumber and ores that made up the tithe the Barony paid as tribute to the royalty of the Kingdom of Lordaeron. The loyal servants of House Hillegas fought in every conflict Lordaeron itself was involved in, earning a reputation for being loyal and honorable, as well as stalwart and mighty in battle.

During the Fall of Lordaeron, the Hillegas' put up a noble attempt to defend the people, but they were easily fought off and thrown into disarray. It was in Elwynn Forest that the Hillegas family became insulated from the outside, relying on only other nearby Lordaeronian refugees for help. During this period of isolationism, the House regressed from it's noble ways and lost practically all of it's recognition in Lordaeron, but some Lordaeronians may yet still recognize the name, even if they do not know exactly why.

Burchard's first of this commendation was earned through his participation of the Grand Alliance's Operation: Avalanche.

Burchard's first of this commendation was earned through exceptional medical aid during the Grand Alliance's Operation: Avalanche.

Like all who participated on the Loyalist side of the Stormwind Civil War against the traitor Darian Lyonesse, Burchard was granted this commendation.

For sacrificing himself to the preservation of allies during the Siege of Dragonwatch, and enduring grievous wounds in the process.

For remaining as a Prisoner of War for the duration of the Siege of Dragonwatch after enduring sustained damage without medical aid.

A painter's rendition of Burchard. (Art by Tearcry08)

The ancient coat of arms of House Hillegas.

The map of the Barony of Zollern. (Created by Candalorian)

The new and improved House Hillegas coat of arms. (Made by Squallrunner.) 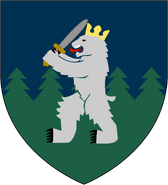 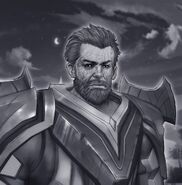 Burchard in his armor, somewhere in Zollern. (Art by Ayie_OlaerArt.)
Community content is available under CC-BY-SA unless otherwise noted.
Advertisement