The Burning Tusk Tribe was a tribe founded shortly after the events of the Third War by members of the New Horde. The tribe has always prided themselves on their loyalty to each other. From the most brutal orc to the caring tauren, every tribemate must prove themselves constantly. The tribe has learned they must not rest on their deeds of the past but move forward for the good of the tribe. These three virtues have been divided up into honor, glory and wisdom. Without this a member cannot maintain rank, move forward or even eventually be forgotten due to lack of deeds. Through foolish means members can gain negative deeds, usually causing harm to the tribe.

Hi and welcome to the Burning Tusk Tribe's recruitment article! We are a horde RP guild that does PVE and PVP in order to enhance our RP. We encourage our members to be active in more than just RP; during Cataclysm we successfully completed all normal 10-man content and intend to do the same during Mists! We also have many members whom are highly invested in PVP and we encourage that.

Our guild was founded in November 2006 on Blackwater Raiders (US) and moved to Moon Guard (US) in May 2008. We are dedicated to infusing the entirety of the game with roleplay. We enjoy in-character raids, instances, quests, world PvP, battlegrounds and arenas as well as simply relaxing at an inn with a nice jug of ale at the end of the day. The members of the Burning Tusk Tribe are fiercely loyal to one another with many members having been with us for years. We love each other as family and treat each other with the respect and kindness that you would expect from close friends. Disagreements can be easily resolved by reminding each other that we're friends and to not take things, like our egos, so seriously! Through out the past four years, we've made long-lasting impacts on dozens of lives.

Guild chat is in-character with the officer chat channel serving as our out-of-character channel. We use both as a means to orchestrate roleplay while in-game as well as a way to get to know the wonderful people we're playing with. We firmly believe that roleplay is often enhanced by good out-of-character relations, and that friends made in-game can hold true, long-lasting friendships.

Most important to us in recruiting new members is how we all mesh together as a group of friends out-of-character, so we look for other laid back, fun loving individuals who enjoy all aspects of the game as we do and know how to joke around and not take everything so seriously. Not only are we able to provide a great place to relax, but our leadership is steady, our membership devoted, our friendships enduring, which means you won't be left without a guild in weeks or months from now. Having lasted through two servers and over four years, we can boldly stand by these claims.

Our goal is to encourage roleplay on the server by RPing throughout every aspect of the game, arranging events, hosting in-character raids, and working hard to foster a positive overall environment both in and out-of-character. We encourage RP to be introduced into all facets of the game including PvE and PvP, as well as random world RP. We believe in approaching RP with creativity and enthusiasm and working to create an immersive and intricate living world. We are one of the few RP guilds that states that protected roleplay channels (/say, /guild, and /yell) are never to be used for OOC conversation, even with brackets, as it harms RP and makes the world less immersive for those around us, not to mention encouraging more OOC discussion than IC. 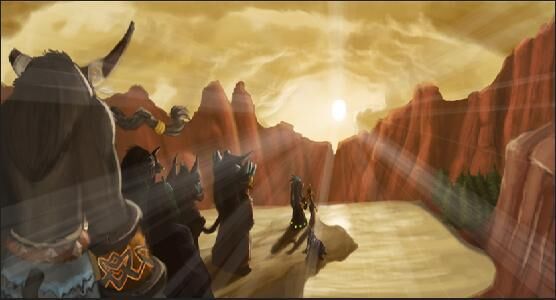 Please note that in-character, we range on the spectrum from good to evil, chaotic to lawful, and all shades in between. We are moving towards a more ‘community’ mindset, and because of this respect is of the highest necessity. Your character will be expected to be polite and courteous to other members, especially in the first few weeks and months as we get to know you.

If you are flexible and play a flexible character, you will likely fit in much better.

The above and much more information including our Rules, Apply info & Guild Application' can be found on our 'Guild Website!

Most BTT events are listed on our forums & on the Moon Guard Realm Forums, but keep checking back here for updates as well!