Moon Guard Wiki
Register
Don't have an account?
Sign In
Advertisement
in: The Coalition of the Horde, New Horde, Organizations, Political Organizations

Coalition of the Horde

Founded from the teachings of Vol'jin and Thrall's ideals of the New Horde, the Coalition of the Horde has made advancements in all aspects of coalition organization, up to and including economics, diplomacy, internal organization, propaganda, communications and defense.

In the fiery wake of the Fourth War, both factions were left beaten and battered, their former power and glory stripped in the ashes that rained down. Several months after the defeat of N'zoth, the Horde found itself in a different landscape from previous wars, with their power and military might lacking in the numbers once boasted and held as a point of pride, now a shadow of itself.

The foundation of the Coalition lies in those threats, this more than evident made itself known with increasing raids on Caravans by bold Centaur and Quillboar, local threats and more rising and taking advantage of the sheer loss of power to try and regain their own glory and land. Domestic and abroad even from the Alliance saber rattlers who wished to pursue the conflict in spite of the Armistice, none more so known than the Northrend Campaign that galvanized the Coalition.

This culminated with internal conflicts that several members of the Horde gathered to discuss about the creation of a proper organization to help rally and revitalize the Horde while doing what they could to defend and rebuild from the disastrous Fourth War.

It took several months but in the end, they were successful in founding the Coalition to much fanfare and equally as much mistrust given the disastrous Fourth War and the overall sensation of being burned out from constant conflict with the Alliance that was rife within the Horde.

However, the Coalition was here to stay.

The Calm before the Storm

The founders knew well enough that there would be mistrust, cynical eyes upon their group and as such, the Coalition simply did what it needed to do, moving forward to help the Horde here and there without fanfare or announcing things. Weeks passed in relative calm, the wake of mistrust washing over them as they toiled to help and support the Horde in whatever manner possible, supporting communal events to raise morale, protecting Caravans and rebuilding slowly.

The calm that came after the Coalition's founding was short-lived, rumors of something happening in Northrend making its way down to both factions through the coming weeks, leading to the unfortunate news that sent shockwaves across the world.

The Scourge was active.

This development lead to a few Coalition figures stepping up to help the Horde leadership in the military command that came to be as part of the Allied Coalition expedition between the Horde and Alliance to head into Northrend.

The Coalition Blooms in the Spring

For either a group or an individual to join the Coalition as a signatory, one must be aligned on an official capacity to the Horde and read through the Charter of the Coalition. Admission shall be granted after request and deliberation by the current Speakers, and once given approval shall perform an Oath and then finally allowed to sign the Charter, becoming party and signatory to the Coalition.

At the top of the Coalition Leadership and serving as the chosen leader of the Coalition sits the High Speaker. The High Speaker has nominal power as intended, the position being more akin to being first among equals and authority resting in putting forth proposals on internal and external matters to tackle mutually. The High Speaker does not serve for life nor are they a noble by the position itself, serving a term of three months and cannot run consecutive terms barring extenuating circumstances that go beyond into drastic measures.

Around the High Speaker sit their equals, the other Speakers who much like the New Horde itself enjoy a great degree of autonomy and indepence as befitting a Horde organization party to the Coalition. The Speakers overall get to speak for their group in electing a new High Speaker amongst candidates raised, should they desire to require or even need a High Speaker after the prior one served their term.

Speakers of The Coalition of the Horde
view • talk • edit

Departments of the Coalition

The Coalition's War Council organize and lead the Coalition's forces in conjunction with cooperation of allies in times of conflict, skirmishes and expeditions. During peace time the War Council is dissolved as made normally in standard operating procedure of Horde military, giving it a flexibility to operate and prepare for whatever comes their way when conflict arises. Champions are the Horde soldier's first point of contact within the military when a situation arises. Lieutenant Generals run their individual day-to-day operations. Above the Lieutenant Generals sit the Generals and above that lies the High Warlord, the last step in the chain of command before the Speakers.

The New Horde Times by its very name is a Horde monthly newspaper based in Orgrimmar. It is the duty of this newspaper to spread the news, along with adding special weekly sections on various topics supplementing the regular news such as opinion articles, communal ads, editorials, sports, and features, to all of the Horde. 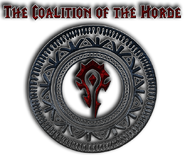 The Coalition of the Horde Banner 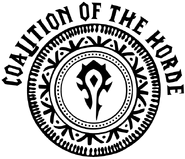 Original Coalition of the Horde Seal 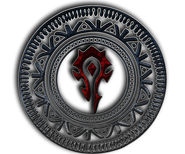 Coalition of the Horde Banner Seal