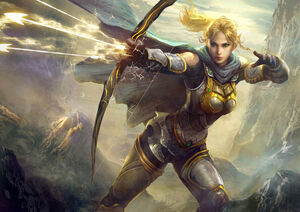 A Divine Hunter is a combatant whom wields the powers of the Holy Light and has skills in marksmanship. They are comparable to the Paladin in martial prowess and weaving their attacks with the Light, while holding the many practical skills of a Hunter. Wielding a bow or a crossbow in lieu of a melee weapon and forgoing heavy armor for lighter armor for the sake of dexterity, a Divine Hunter favors mobility and distance when engaging in combat. Their faith in the Light allows them to emphasize their ranged capabilities, heal their allies, or provide auras to aid their allies.

Their primary roles are being scouts and supporting their allies with arrow and Light alike, though some take it upon themselves to be independent hunters of the dark forces of Azeroth. These dark foes usually include the Undead and agents of the Void, along with rogue demons. Some also take it upon themselves to combat the natural dark magic of the Drust and other agents, being comparable to the Witchhunter in agency and methods.

The concept of a Light-wielding hunter is not a new one in the history of Azeroth, as many paladins and priests have taken up a bow from time to time, though a fully-fledged devotee of the combat style is an uncommon sight. They do not have a dedicated sect nor status within the Church of the Holy Light. While some do carry titles of Knighthood, it is not a prerequisite nor a requirement.