Self-proclaimed "Dread" Pirate Captain, Lazovius Burgan's, pirate fleet, founded by himself for himself. This sleet sailed the many seas of Azeroth, from the Uncharted Sea to the Forbidding Sea. It was sunk off the coast of western Stranglethorn by an ambush of pirate hunters in the year 30 L.C.

Over the 27 year long career of the Dreadwater Fleet, the original ships have either been sunk, or completely torn apart to build the new, upgraded ships. The ships below are the last ships that made up the fleet before it was destroyed. 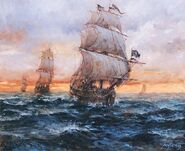 The Dreadwater Fleet at sea.

The final battle of the Dreadwater Fleet
Community content is available under CC-BY-SA unless otherwise noted.
Advertisement