Moon Guard Wiki
Register
Don't have an account?
Sign In
Advertisement
in: Characters, Half Elf, Warriors,
and 2 more

Elianath 'Elian' Dawnsong is a half-Quel'dorei warrior and bard. Recently, he was knighted by Sir Ocerios Fairo and set about as a Knight Errant. He mostly has roots in Stormwind City, now, and has found his way into the ranks of the Silver Star Dragoons. He has also begun to work alongside the Night Fae. (Elianath in game.)

Elian Dawnsong was the product of an affair. His father, Astarion Dawnsong, was a politician within Silvermoon City, one sent as an envoy to Lordaeron. There, he met a lovely young human woman named Tanya Branson, a servant. The woman fell in love, which was unfortunate since it wasn't exactly mutual. After business in Capital City concluded, Astarion left. That seemed to put an end to things quite quickly, or so the man had thought. That was, until he received word that the woman was pregnant--- or more, his wife, Dania, received word of it. Tanya couldn't care for the coming child and she knew it. So, a deal was arranged. Tanya came to Eversong, gave birth, and left Elian with the Dawnsongs. Dania loved the little boy like her own blood, though Astarion was less than pleased with the obvious stain on his reputation.

Dania always did her best to make certain that the boy was well taken care of, but even she couldn't protect him from his father's fits of rage at almost everything he did. Elian was always a disappointment. Always a reminder. It didn't help that his human side was visible to others around. Though Astarion did his best to hide Elian away, those that met him could instantly tell his parentage.

When the Scourge ravaged Lordaeron, the Dawnsongs received word that Tanya had become a refugee in Stormwind City. Astarion had the idea of sending Elian to live with her, especially as the armies of the undead turned towards Eversong. It was an opportunity. Dania would have none of it. She kept the young boy, only nine at the time, close to her. Once the Scourge had assaulted Silvermoon, things only got worse between Elian and Astarion. The resentment was increased. What was once only verbal anger turned physical. Dania did what she could, but that didn't amount to too much.

At the age of 15, things became more perilous for Elian in Eversong and Silvermoon. The now-Sin'dorei had joined with the Horde and the clearly half-human boy stood out. He didn't stand out in a good way. Though, despite this, the majority of the animosity towards him still came from his own father. He kept himself away from it all as best he could, focusing on music and daydreams of being a knight, even going so far as to train with a blade.

And then Elian turned 18. The world had shattered. Tensions rose more than ever before. Astarion came to Elian with a deal: Leave Eversong and be well compensated. A payoff, of sorts, though a continuous one. As long as the young half-elf didn't return, he would receive constant payments. Enough to support him without need for a job. Elian took the deal, though he hated leaving the mother he'd always known. He set off, leaving his home behind.

He'd debated heading to Stormwind, but instead ended up on a ship out of Eversong that he hadn't realized was a pirate vessel. A woman by the name of Skye Amberglow had lured him in. The next two years flew by in a blur as he roamed with Skye and her crew. His relationship with Skye was not a stable one, not a healthy one. It was a mix of questionable substances and an equally questionable attachment to the woman as they split and came back together repeatedly in massive and dramatic ways. It took those two years for Elian to truly process what he wanted out of life... and it wasn't that. It would never be that.

He broke away from Skye and her group, finally deciding to seek out his birth mother in Stormwind. The city was quite a change from what he was used to, but he found as he healed... he flourished. At least, as much as he could. He turned to his lute, his singing, his training as a solace. Tanya had been happy to see him and had helped him stabilize himself.

As the Fourth War flared up, Elian did his best to avoid the conflict, but it proved impossible. As more and more fell in battle, ending up in the ranks of the 7th Legion became harder to avoid. He was drafted and spent some time in the fight, especially at the Arathi Front. He did the bare minimum and left the service without any praise or acknowledgments. He didn't want any. Instead, he returned to Stormwind. It was all incredibly uneventful and he preferred it that way. He wanted to be a knight, but not like that. War, it turned out, wasn't for him. At least, not a war he barely believed in. He did take some time once the war ended to focus on his music, on being a bard. He found work with the Sightless Eyes Tavern until its disastrous collapse.

Though that war, that fight, hadn't agreed with him, other causes and fights did. As the dead began to swarm, Elian reacted. He made certain Tanya was safe and then headed straight for Eversong. Despite his father's displeasure at seeing him, he was allowed to stay--- but not to spend any time around his new half-sister, Alayne. Not that the five-year-old would have processed who he was. He spent some time around Dania, happy to see the mother he'd grown up with again. While north, he fought Scourge in Eversong and the Ghostlands. After Astarion decided he'd been there long enough, he was sent back to Stormwind. Now, he balances between his work as a bard and occasionally helping to drive back the Scourge.

After an encounter with Residuum of Icecrown, Elian was faced with the fact that he isn't made for battles in which allies can die. He then joined a circus, The Ambrose Arcana, as a bard, quickly gaining the favor of Lady Ada Ambrose and becoming one of her Hands within the group. Any off time was spent at the Lion's Rest fountain with the group of bards there, drawn to them by one Trist'Ayran Ambrosio. He and Trist have since formed a relationship.

As dire news began to circulate from the Shadowlands, Elian decided to answer the call for aid. His first real interaction with the Shadowlands was the Battle for Ardenweald. He pledged his aid to the Night Fae. Shortly afterward, he received news of Lady Ambrose's sudden passing due to childhood illness. The Arcana disbanded, but a few members kept contact, despite that they are now divided by conflict. After a bit, he was invited to join Trist's group, the Silver Star Dragoons. He's now helping them in the Shadowlands and the Maw especially, he's also performed the soulbinding ritual with Trist.

Elian seems to be cut from marble in his appearance. He's a stunning young man with all of the beauty of his Elven half-kin. However, it's clear there's enough human in him for his ears to be shorter, his eyebrows humanlike, and his gaze to hold no glow. Green, almost hazel, eyes hold a mirth to them that isn't easily extinguished. His skin is on the tanner side of fair. His hair is kept short and is a dark brown. He can usually be found with scruff of some kind, but never a heavy beard.

He stands at 6' even and is well muscled. It isn't just his face that seems to be cut from marble. The young man clearly spends a lot of time building up his strength and working on his appearance. Some might even term him quite vain in everything from his hair to his nice-casual manner of dress to the items he carries.

As for scars, Elian has several scars over his back, including one major one on the right of it. There is also a scar just under his hairline, near his left ear. Minor scars litter his body, but they all seem rather old. Though he's careful not to gain new ones, there are some fresh ones littering his body from the Scourge attacks. He also bears a worgen's claw marks on his side, beginning at the bottom of his ribs and moving down and around to his lower stomach.

His voice is warm and friendly. His singing voice is mostly a baritone, though it can easily dip into bass here and there. There's a rich quality to it. The dulcet tones tend to carry over to his speech. Elian takes great pride in his voice, both with singing and speaking. Voice claim: Michael Bublé.

A commission of Elian Dawnsong by Gabriela Cucos. 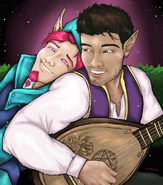 Elian and Trist by Shokes

Astarion, Dania, and Alayne Dawnsong. Elian's biological father, the mother he was raised by, and the half-sister he's only met in passing. He and Dania are on extremely good terms, though his relationship with Astarion is terrible at best. Astarion funds Elian's lifestyle in exchange for him staying away from the family. There's also Tanya Branson, Elian's biological mother. The two didn't meet until Elian moved to Stormwind after his binge years.

Elian's ex-girlfriend with whom he had an incredibly tumultuous on-again-off-again relationship. She and Elian brought out the worst in each other constantly and had rather unhealthy attachments to each other. The two haven't seen each other since their more permanent split.

Lady Ada Ambrose had quite the effect on Elian's life. He was doing fine for a while, but he was coasting. Ada hired him to perform with her circus, but she saw something in him. She saw responsibility, care, and potential. He was made her second-in-command and served the circus with all he had until her death.

Elian's grown quite close with a group at the fountain comprised of bards and music lovers, but he was drawn there by a nearly magnetic pull towards a Ren'dorei named Trist. The two worked on being friends after Trist admitted to not being one for relationships, but things rarely go according to plan and they fell deeply for one another. Elian's happy to call Trist his partner, his boyfriend, and his soulbind.

- Elian exists off of WoW, but as an adapted character named Joshua.

- Elian lives in the Cathedral District of Stormwind, right beside his mother Tanya.

- Elian uses a mix of rosemary and sage water for his hair.

Community content is available under CC-BY-SA unless otherwise noted.