High Inquisitor Ella Holcomb is a zealous priestess hailing from the northwestern region of the Uplands. She is the current leader of the Inquisition of Truth.

Ella hails from a family situated in the Uplands, resting in the mountains north of Darrowmere Lake. Though effectively born on Alterac soil, the Holcomb family is decidedly of Lordaeron heritage.

Holcomb was raised under the standards of nobility, though she was quickly thrust into military roles and religious pursuits following the fall of Lordaeron. Due to the murky history of the Scarlet Crusade concealed by her father, the priestess' initial alignments were made with the nascent Argent Dawn.

Ella's eventual encounter with the Scarlet Crusade became a trying time for her faith. Discovering the fate of her mother among the infamous zealots, whom she was bred to believe had died during the initial invasion of the Scourge, lead her to question her allegiances. The young priestess was already a notable firebrand and passionate, sometimes ruthless inquisitor, thus, her loyalty to the Argent Dawn strained and eventually dissolved completely. She left the organization on bitter terms, wishing ill upon them.

Though she remained rogue for many years after the Shattering, Ella began her search for the remnants of the Scarlet Crusade, despite all signs suggesting their ostensible eradication.

Within Tirisfal, a fortuitous meeting between Holcomb and a renegade band of bloodthirsty Scarlet survivors lead by Crusader Thoreau was also joined by the timely arrival of Chandan Ostrick from the monastery. After the ensuing violent resolution between Thoreau and the crusaders of the monastery, the High Cleric recruited the priestess. Holcomb would prove a vital instrument in weeding out further dissent among the ranks, becoming an inquisitor for the Truthful.

Ella’s mostly ruined home of Pyrebane remained in an apparent stasis since the time she left it. Lord Chase Holcomb, her father, still championed peace for his land and the many hungry mouths taking refuge under his watch. Embittered, she returned to the keep, spurring conflict with her father while ensconced in her role as an inquisitor for the Army of the Truthful.

The Truthful forces brought further tension within the Holcombs' residence, turning the once humble sanctuary into a staging ground for Scarlet zealots. The boiling point was reached during the Assault on Daybreak, where an inevitable insurrection lead to Ella succeeding her father through violent means, ordering his execution thereafter. 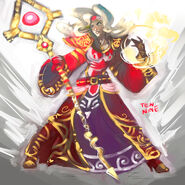 By https://www.deviantart.com/soleilloo
Community content is available under CC-BY-SA unless otherwise noted.
Advertisement