The Hand of Argus is an order of draenei paladins and vindicators that serve as the primary military and police force of the Exodar. Their presence is strongest in Bloodmyst Isle, where the greatest of the corruption on the Azuremyst Isles has taken hold.

The Hand of Argus is led by the Triumvirate of the Hand — Vindicators Boros, Kuros, and Aesom. They are stationed in Blood Watch on Bloodmyst Isle. However, despite remaining mostly on Bloodmyst Isle, the Hand's agents have been seen in Ashenvale and Nagrand. 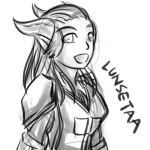