The Hearthstone Tribe is a Horde tribe that first operated within Orgrimmar and afterwards the rest of the Horde's territories and outposts. With the lasting legacy of the Alliance-Horde War and Garrosh's impact, the tribe with its very foundation had sought to find a home amidst the constant upheavals and conflicts that arrived on Azeroth. The Hearthstone Tribe eventually found one in a still relatively uncharted island, a lush island still unnamed as they toil and work upon its very foundations from their temporary home in Stonehearth Camp.

From the humid jungles of Stranglethorn Vale, to the rolling plains of Mulgore and all the way to the enchanting woods of the Eversong Woods, the Hearthstone Tribe is a culmination in what it means to be a part of the Horde. To adapt, grow and thrive. The Tribe itself is devoted to bring stability and prosperity to the Horde, to bring out the best in everyone to help bolster and support the Horde while ensuring that it's own home is defended and secured from all threats.

The Hearthstone Tribe's open-door policy of accepting all walks of life has made it be comprised of a conglomerate of races. Given the open-door policy, however, there always lies the chance for non-conventional races to pledge and swear their allegiance to the Tribe and to the Horde.

It started as an idea, planted in the mind of Jab'trah by the Orc Mage known as Kra'kii Veinsplitter. To create an organization that could be called home, even if it was something simple as a tribe. This idea grew within his mind in rapid fervor within the coming weeks, watching the world be assaulted by the Burning Legion. Even with such a dire existential threat at the forefront, people still instinctively yearned for something to call home as Kra'kii had once mentioned to him.

With this realization, Jab'trah knew he could not simply watch but put forth his best effort to right the wrongs he saw.

The very founding of the Hearthstone Tribe has humble origins, all stemming from within the capital of the New Horde, Orgrimmar. Barely half a year after the Third Burning Legion Invasion of Azeroth had started, a lone troll by the name of Jab'trah had been drifting without a home, doubting himself and his abilities to put his entire effort to fight against the Burning Legion upon the Broken Isles.

It was thanks to a series of encounters with a few individuals, such as Lunica Swiftsun, Kra'kii Veinsplitter, Orak'lem Dawnshield and a few others that lead to the troll to the realization that in spite of the personal troubles he'd undergone, it had blinded him to the fact that the world was still hurting and needed all the help it could get. With the support he'd received and with the very spirit of it, he founded the Hearthstone Tribe as a home for every walk of life, be it the exiled and the reviled, to simple folk who craved and desired a home.

With the backing of his new tribe and as Chieftain, the Tribe strode forward in the defense and support of its newly founded home.

With the Tribe newly founded, the small band of intrepid tribemates surged onwards to do what they could in support of the Suramar Insurrection, be it by supply runs or passing messages to intermediaries given their smaller numbers. Thankfully, the efforts of the Insurrection was successful and freed the Nightborne from the clutches of the Legion but the Legion itself never ceased as focus and attention was finally brought towards the Broken Shore.

The Armies of Legionfall was formed and with it, the goal to finally putting an end to the Legion's invasion, the full might of Azeroth focused on breaching the Tomb of Sargeras and closing the very portal that surged with the unending armies of the Burning Legion. The Tribe's growth was small given the potential of casualties and injuries, more focused on being a supportive group to the armies of Legionfall and doing what they could to aid in bringing the portal down.

After several weeks of assaults upon the Tomb of Sargeras, the Armies of Legionfall were successful in closing the portal but also successful in opening a portal to Argus, the central lynchpin of the Burning Legion and all of its armies.

The Tribe put forth efforts to send a contingent of its ranks to Argus, alongside supporting the Horde and its military with all kind of material goods and foodstuffs. All in an effort to support the effort to finish the fight against the Burning Legion.

In addition to this, the Tribe was 'stationed' officially within the city of Orgrimmar to facilitate various functions between the Tribe and the Horde, along with ensuring the city remains safeguarded in any event by the Legion.

Despite the initial blows having come from the Alliance's SI:7, The War of the Thorns had unequivocally set the tone of the Horde being the aggressors in the Fourth War with the culmination having lead to the Burning of Teldrassil and the destruction of the Night Elven capital of Darnassus.

Just like that, any notion of Sylvanas being a good Warchief had taken a massive dive in the sheer destruction and horror she had ordered done, pushing the Horde firmly into the age-old concept that it once was, the old Orcish Horde. A sheer force of malevolent destruction that thrived in butchery and violence. This was not the Horde the Tribe had pledged Loyalty to, neither was it the Chieftain's having fought against Garrosh and his True Horde in the Darkspear Rebellion under Vol'jin.

Once more, the Chieftain pledged his and kin to rebellion but this time in secrecy given the tentative nature of the war. There were no allies to be had nor found in the Alliance, the Burning had closed that door to most rebels who were forced to remain within the confines of the Banshee Queen's machinations and 'Horde', secretly toiling in the background out of necessity to bring about her downfall. So too did the Tribe commit itself to such an effort, to the point that the Chieftain had started wearing more naval garb of a Pirate to announce his intent in rebelling against authority in blatant shadow of the Banshee Queen.

Their efforts lead to an increase in activity throughout the entirety of the Fourth War, however, just as fast as it increased the sheer exhaustion of the effort put into supporting the rebellion lead to several having to take a break even as the Rebellion was successful in bringing about the downfall of Sylvanas as a Warchief. The Fourth War, least for the Tribe, was over for now.

Despite the abrupt end of the Fourth War, the forces of the Old God N'zoth had come out in force to try and remake Azeroth. The Tribe was unable to participate much in this given the prior burnout, so their efforts was focused more on support and healing.

In the end, N'zoth was defeated and the world had entered a period of rising tension between the two factions.

War Against the Jailer

The Tribe by this point had reached an effective decline in simple numbers due to exhaustion and burnout from it all, but in spite of it, the Tribe moved ever onwards to do what they could do to rebuild the Horde while the rest in the Ebon Blade and adventurers did what they could to assist the overall Covenants.

This lead to the overall founding of The Coalition of the Horde by the Chieftain alongside his fellow contemporaries, and then being shoved into the position of High Speaker. This overall new position lead to a slow burn rebuilding amidst the ruined husk that was the Horde in the aftermath of the Fourth War, eventually leading to a renewed Chieftain in the increasing tensions and sharp words from the Alliance, fast-tracking the Tribal expansion in terms of structure and effort. The foundation of the Tribe had been strenghtened and reinforced under the threat of Alliance aggression, pushing forwards with a new dawn of resurgence on the horizon.

At the top of the Tribal Leadership and serving as the chosen leader of the Tribe sits the Chieftain. The Chieftain is the supreme holder of power in the Tribe, the title representing the summit of the Hearthstone Leadership. The Chieftain has a wide range of powers, including the ability to sign treaties and declare war on other organizations. The Emperor reigns for life unless he/she steps down beforehand, and by some measure could be considered 'noble' by those races inclined to see such leadership as one.

Below the chieftain on the totem pole sits the Council of Elders. These are members of the Tribe who rose to prominence through hard work, dedication to the tribe, and exceptional skill in their area of expertise. The chieftain hand-picks each and every member of the council in recognition of their efforts to better the Tribe as a whole. Each elder is the master of one of the two paths, the ward and the vanguard. Each elder is tasked with administrating their respective path, no two elders share the same responsibilities and some administer the day to day running of the tribe’s various needs be they logistical or simply to find new members. Alongside their normal duties they act as advisors to the chieftain himself when he is faced with a decision affecting the health and wellbeing of the tribe.

The Hearthstone Tribe in the beginning only offered a simple path between a Guardian and Keeper. Those two paths were expanded upon, expanded wide to accomodate the needs and wants of the Tribal membership and their skills and talent, and that of the Horde's needs. 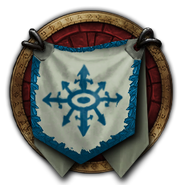 The Current Guild Emblem Crest of the Hearthstone Tribe. 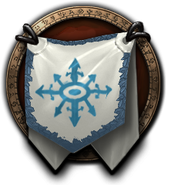 The Original Guild Emblem Crest of the Hearthstone Tribe.

A Base Hearthstone Tribe feather given to Tribemates.

The Base Hearthstone Tribe feather of either a Blood Guardian or a Keeper.

The Base Hearthstone Tribe feather of an Elder and Former Elders.