Born to a family of Highborne nobles, her childhood experiences gave her a great sense of adventure and intrigue. A traumatic brush with mercenaries near the southern reaches of the Kaldorei Empire triggered an encounter with C'Thun, opening her heart to incongruous energies and altering her fate forevermore.

Following the events of the War of the Ancients, she led a life of solitude, sequestering herself away in the wilderness of Feralas, then Ashenvale. Shortly after the Third War, she gradually reintegrated into Kaldorei society by joining the Sisterhood of Elune.

During her stay in Darnassus, she joined the firebrand Archdruid Fandral Staghelm, drawn into his circle by his charisma and vision. She served as an informant, siphoning precious information from the Sisterhood to the Archdruid's men. This lasted for some years, until she and others were implicated in Fandral Staghelm's plot to undermine Tyrande Whisperwind and Malfurion Stormrage. She was exiled as a condition of her suspected involvement.

Suffering with purposelessness, she boarded a ship to the shores of the fabled Eastern Kingdoms. Enlisting with the Grand Alliance's military, she aimed to distance herself from delving further into the void. The distraction proved fruitless—the Alliance's lax policy on the use of dark magic in times of war encouraged further ventures into the unknown and dangerous encounters with cosmic forces.

Her insatiable desire for knowledge and power a hunger she knew since childhood. After combing through the many libraries of Stormwind City, she journeyed to the Hall of Explorers in Ironforge. During her studies, one of her valuable texts was stolen by a thief. Pursuing the thief, she discovered that she'd known the figure from the distant past: her first love, Ethendral Kel'rasus. This unlikely encounter reignited a deep romance between Iahri and Ethendral until their love blossomed yet again.

Orienting her talents towards superficial servitude to a higher calling, Iahri joined the infamous 117th Division, the Might of the Alliance, as Majordomo to the Grand Marshal Ashamal Shalah'aman. Using her brother's tremendous resources proved fruitful in her transition into leadership over the Long Shadow following the events of A Field of Wildflowers.

Its conclusion proved to be especially bittersweet for her: Ethendral sacrificed himself to ensure the safety of those involved. Since then, the 117th Division dissolved following Ashamal's retirement. Once more finding herself without purpose, she wanders Azeroth. 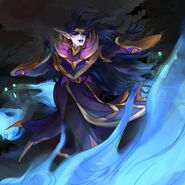 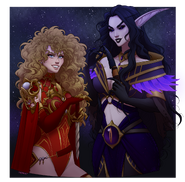