Moon Guard Wiki
Register
Don't have an account?
Sign In
Advertisement
in: Void Elf, The Silverguard, Hunter,
and 2 more

Ilari Shadowveil (born Ilarielle Crimsonvale) is a Ren'dorei Markswoman formerly associated with the Silverguard. She is the daughter of Cervantes Crimsonvale, a noble who served Quel'thalas as a trial attorney lawyer for nearly five hundred years and retired after the Second War. With her father's popularity, nobility, and financial status, Ilari would find herself attending Silvermoon's top schools and had an interest in law until she participated in an extracurricular archery class where she excelled quickly in and approached by a Farstrider Recruitment Officer. Ilari would accept the position and spend most of her adult life in the military. Quickly moving up the ranks with help from her quickness, precision, tracking and professional skills, she'd plateau at the rank of Sergeant and would be involved in both the Second and Third Wars before becoming a Ren'dorei.

Along with her military accomplishments, she has notable academic success. She has a Masters in Political Science, was captain of her debate team and scored a 174 on her LSAT, earning her an offer at Silvermoon's prestigious Law School. She also holds several trophies and recognitions from debate, archery, track, and was number three in her class, overall. Her background in law and military has given her the ability to be sharp with her words and has been successful at intel gathering from people, notably reading their body language and mannerism and weaves questions and responses to their interests and reactions.

Born over 220 years ago in Silvermoon and raised in a fabulous estate near Elrendar River, Ilarielle lived a quiet life as an only child. Despite growing up an affluent environment, she always gravitated to books and writing, likely due to her parents professions. Her father, Cervantes is a critically acclaimed attorney and community contributor to Fairbreeze Village, often found donating and even participating in projects. Her mother, Lorielle, was an accomplished architect and garden designer, responsible for constructing luxury condominiums in Silvermoon City. Ilarielle is also associated with the House of Dawnvale, a nobility line that, prior to the Third War, had prestigious influence in the community of Silvermoon, recognized for their great wealth and contribution to schools and teachers. This instilled purpose for a young Ilarielle, for even at a very young age, she would be found helping the community with repainting or planting new trees and flowers in and around the Kingdom.

Unfortunately, she would lose her mother at a very early age due to an unknown illness at the time and has yet to uncover what may have caused the sickness. This resulted in a soft-isolation for the family where Cervantes and she would seclude themselves more and more, becoming community enigmas instead of the popular figures people had grown accustomed to seeing, with Cevantes infamously writing in a poem 'I shall never know this love again. No song will ever sound as beautiful as the tune that came from her fingertips,' a reference to how skilled a pianist Lorielle was.

Despite that horrible experience, Ilarielle would still attend Quel'thalas' most prominent schools through her life and would routinely graduate with some of the highest, if not, the highest honors. Her success caught the attention of the Magisters, a predominant political faction within Quel'thalas comprised of mages, and had begun training to become a Magistrix, though, to no success. After numerous failures and a situation where she lit her hair on fire, Ilarielle would drop out from training and resumed her studies, focusing back to becoming a lawyer, much like her dad. This goal propelled her back to academic success and would be accepted into one of Silvermoon's most prestigious universities where she would graduate with honors and achieve a degree in Political Science. This ambition pressed: she'd become captain of the debate team, routinely impress in mock trials and is credited for discovering a loophole in a contract no one had seen: the Distributors' Comma, it was called, where Ilarielle discovered a misuse of a comma and utilized it to her advantage during the mock trial, citing a particular item exempted from tax that was originally meant to have a 'hyphen' (fruit-plants, not fruit, plants). With this phrasing, this allowed free entry of fruits and plant imports as opposed to being fruit-plants as it was detailed in the document, despite not intending of what the law had originally implied.

She would continue to excel in university and would participate in extracurricular activities, most notably archery. She had wielded a bow before but never pursued an expertise in the skill and it had been a few decades since she had fired an arrow. Starting off as one of the worst, Ilarielle pushed herself and found a genuine love for archery, quickly advancing to becoming one of the higher levels archers which drew the attention of another predominant Quel'thalas faction: the Farstriders.

Ilarielle's ongoing academic success and archery skill brought the Farstriders to inquire about joining the organization. It was a question that she allowed to linger until achieving her Master's degree and even passing the LSAT, however, after a very long talk with her father, Ilarielle accepted the Farstrider's proposal and joined the ranks of Quel'thas' most respectful military. Her family had little exposure to the military and this showed as there was a difficult learning curve for her. For so long, she had been a reserved, quiet and shy girl until she was presented with a task that required her to defy how she acted. It was similar to a switch: when asked to perform a mock trial, she would shape into a different woman with a completely different demeanor and mannerism, but when she is not performing, she opts to remain quiet. It was a personality trait her instructors found and utilized, which only gave her success when it was finally refined.

She would cease pursuing any additional academic success and strictly focus on honing her military skills. She dieted, exercised and read up on strategies and war studies, learning and doing what she can to be an optimal soldier. This drive catapulted her to Sergeant: a position she earned just a couple decades before the First War and a title she would remain in up until the Third War.

With confidence earned and accolades made, Ilari finds herself as a bold and determined woman who, despite having her reserved tendencies, can speak with fluent precision and isn't afraid to dig into a conversation or a question when it's warranted. However, due to the nature of who she is, Ilari is the victim of discrimination which only propels her reserved nature. It's very difficult to earn Ilari's trust if one is not a Ren'dorei or is sympathetic to their cause and she would rarely stay in one area for long in fear that someone would feel her void energies pulse from her body. She's been chased out of towns, subject to attempting poisoning, hurled garbage at and even violently abused by denizens who aren't keen on the Ren'dorei philosophy. Miraculously, she's remained true to what she believes in and has made it a goal to reshape the perception of Ren'dorei to the world by staying true to her beliefs and displaying genuine acts of kindness- even revisiting her own desire to help and build a community. 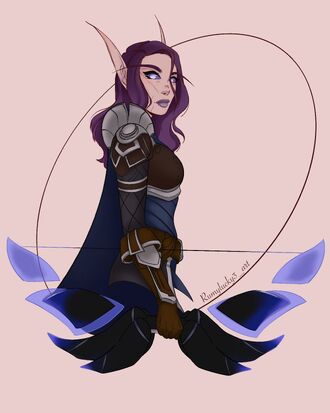 She considers herself 'in the middle of distant moralities:' she still bares the pale skin of who she was prior to this evolution yet she pulsates the eerie energies of the Void. She's tolerated in both the Quel'dorei and Ren'dorei crowd and aims to not be assigned to one clique, but instead, be a bridge that could allow the two parties to properly commune one day. The mentality also carries over with how 'gray' her line of thinking is, meaning she rarely aligns herself with one extreme or the other. She fancies herself as a moderate and will always see the benefits and deficiencies of both sides. A 'Devil's Advocate' role, Ilari knows that she is on a moral spectrum unfamiliar to many in this world and that closely considering yourself with one belief is a detriment to knowledge growth. It's why she does not particularly like those in service of the Light, believing them to be myopic and predisposed to immediate discrimination and unfair ridicule. She's also not a fan of the Ebon Knights, finding them unchanging and selfish even despite their own consternations they've dealt with. There must always be a middle ground for Ilari and if one person strays too far from that middle point, it is likely she will not tolerate them and would quickly call them out as ignorant or narrowminded.

Cervantes Crimsonvale: Her father, Cervantes Crimsonvale, views her daughter positively, despite her acceptance into the Void, and Ilari cherishes her father overwhelmingly that she frequently visits him in Quel'thalas despite risk of capture. Their relationship has always been positive, even through the isolationist times after Lorielle passed. She cites him as being an inspiration and puts immense trust in his judgement and will consult him for questions and advice. Cervantes, in return, is very protective of his daughter and will publicly shame anyone who insults and belittles Ilari for the decision she made. In fact, he insisted Ilari to keep her surname after being exiled but she persisted, refusing to damage their nobility status and out of respect to their long family name. 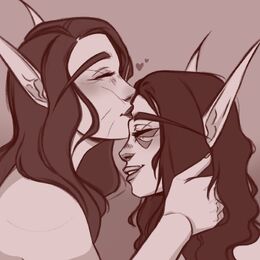 Isira Lure'mil: Ilari is currently in a relationship with Isira Lure'mil, having formed a bond after the Tropic Sunder campaign in Stranglethorn Vale. Ilari found Isira's attitude to be strikingly bold and bolstered by her firm beliefs and moralities. Though, their relationship nearly tanked after Isira's lie when accused of murdering some Jungle Trolls and goading the Horde by nestling their severed heads for display, they would slowly heal after many visits to the Dawnspire Tower in Quellorian where Isira was being imprisoned. Ilari would routinely be the only one to visit her as it grew more and more apparent that others have forgotten her. With Isira released, they continued to build their relationship and have grown closer since Stranglethorn.

Ilari, however, still views this relationship with caution. Given Isira's association with the High Vale Elves and the Green Dragonflight, a Ren'dorei, such as herself, is seen often in a negative light and Ilari treads carefully around Isira to placate her own allies. Though, Ilari does possess a cynical philosophy that their relationship will not last and there will come a time where the Void festering inside her will overwhelm her, forcing Isira to put her down.