Lasha'theda Everglory, often referred to as Lasha, is a mechanized High Elf Engineer of the Silver Covenant and the Science United Network of the Silverguard. Often dubbed "the Mushroom Farmer", she is very passionate about her craft in every facet she may find interest. Even as a weapons development specialist, she actively tinkers with almost any field of engineering. Even after circumstances on Mechagon left her partially mechanized, she has since embraced her fusion with technology with the intentions of improving upon it as best as she can.

Lasha'theda was born as an only child to the wealthy House Everglory, inheriting her parents' luxurious lifestyle and culture. Valuing their status and wealth, her parents encouraged her to pursue an education in profitable ventures, and for this she studied in the field of geology. Learning about valuable gems and ores put her on the path to a career as a prospector.

As an adult, Lasha became a prospector, but also a miner. She liked to involve herself directly in mining operations and had something of a hobby in fashioning minor jewelry herself in her spare time, from gems she collected that were otherwise deemed unimportant, such as Malachite or Tigerseye. Otherwise, her services were taken up by wealthy jewelers and socialites of Quel'thalas. Though she almost never ventured beyond the border of her homeland, her clientele eventually broadened significantly with both the Second War and the Third War.

Following the Fall, Lasha took to more freelance work, usually going where people were willing to pay for capable muscle or a keen eye. House Everglory lost everything with the Fall, forced to migrate across lands to find a safe haven, leading Lasha to do what she could to support her otherwise destitute parents. After years of travel, Lasha found herself grounded once again with the founding of the Silver Covenant, finding some peace in being among kin once again. With the Silver Covenant's operations in the north, word eventually reached Lasha of the incredible findings across Northrend, particular in the far corners of the enigmatic Storm Peaks.

Lasha booked passage to the Storm Peaks to arrive in the goblin town of K3 where she collaborated with the goblins' research on Saronite. At the time however, the adverse effects of Saronite exposure had yet to be fully documented, and while Lasha was not believed to succumb to insanity, it was noted that she experienced deviations in her behavior that have led some to believe her mind to be addled by the Saronite. She experienced frequent night terrors and was plagued with visions and whispers until she was given a "treatment" by the goblins namely in the form of alchemical tonics and hypnotherapy.

Overall, following her treatment, Lasha had stabilized and was fit for work, with some slight changes to her personality. The changes ultimately were a more "open" state of mind, driven by much more creative, if reckless, thought, which was considered to be a net positive that had just rubbed off from the more adventurous goblins. Though she was becoming increasingly odd in the eyes of her fellow elves, she grew closer to the goblins and their own love of explosives, weapons, and the pursuit of science.

In the wake of the war in the north, Lasha carried on, and with a new interest: engineering. The goblins' passion for their mechanical craft rubbed off on the elf and she took to communities such as New Tinkertown, Gadgetzan, Ironforge, and more, to get a better grasp on engineering. Taking up the profession for herself, she eventually was able to begin putting aside her prospecting career in favor something new as an engineer. She assisted primarily in weapons development for the Alliance and some smaller technological organizations, such as Steelcove Robotics.

The Alliance-Horde War and onwards proved to be a point of interest for Lasha as it was the first time she began to truly consider the scope of high-power weapons. Stories of the goblin nukes used in the Hillsbrad Foothills, the Bombing of Theramore, and the development of the N.U.K.U.L.A.R. and A.T.O.M.I.K. warheads in later conflicts all furthered Lasha's passions and obsessions. The growing stakes of Azeroth's fights led Lasha to see a certain salvation in the force and fire of such overwhelming weapons, leading her to push for their more lenient use in battle.

While she was focused on the study of the engineering of nukes, Lasha was deep in the study of the Mana Bomb as well. Learning about the Arcane radiation that lingered in Theramore, the gruesome fates of some victims, as well as the documented changes dealt to Jaina Proudmoore, she began to delve into the ideas of radiation technology for applications both in weaponry and in treatment for excess radiation.

Politically, she grew to resent the tyrannical rule of Garrosh Hellscream and became outspoken about her beliefs in true democracy. When Mechagon was discovered and the people's plight against their king was realized, Lasha was quick to join the movement to free the Mechagnomes from their king's dictatorship. Though Mechagon was a boon for Lasha's love of engineering, it also proved costly. At one point she was captured by Mechagnome forces, and lumped into an experimental program to study the effects of mechanization on other races. King Mechagon sought to mechanize all life, but life on Azeroth had grown to include races not belonging to the Titans - elves included.

Prisoners with different origins - Orcs, Draenei, Trolls, Elves, and more - were captured and experimented upon. Lasha was one such prisoner, and her body was partially mechanized. Her arms were replaced with metal prosthetics, and her eyes taken in favor of ocular implants. Though she and the others were freed, little could be done to restore her previously elven state. It was a long time of pain and adjustment for Lasha, with no small amount of difficulty as she felt regular pains from her missing arms and struggled to adapt. However, given time, the Rustbolt helped her to appreciate her mechanization and embrace it in full, learning to improve upon her transformation at any given opportunity.

Under normal circumstances, Lasha would appear to be a youthful, physically fit specimen of an elf. Freckles dot her face, and her physique remains consistently toned through her military service and work on the field. She often likes to sport rather casual garb, frequently seen wearing tank tops and patched jeans, with knee high boots and a belt full of engineering tools.

But the circumstances are also a little abnormal. With her shockingly blue hair tied back in a messy, disheveled ponytail, the ocular implants she wears in lieu of her organic eyes are immediately apparent. Looking almost like goggles to the unfamiliar, her right lens is wide and circular, while the left is narrow and used for focus and close analysis. Almost always on display are her silver and blue prosthetic arms, metallic in every way. Whatever these arms are capable of is carefully concealed beneath the plating, but one can only guess what sort of modifications those arms have received.

Lasha can be considered eccentric by elven standards, with an unusual sense of flair, an almost goblin love of explosives, and a passion for political change. She has embraced her state of being part machine, and revels in the progress of gnomish engineering as well as the destruction of goblin engineering, with an uncanny genius for both. For the most part she is usually in a drastically different state of mind to others around, seemingly making her own fun even in formal circumstances. Among elves, her behavior has been seen as somewhat dubious, and her mind has often been considered to be addled by Saronite. Due to her Saronite exposure, she has increased sensitivity to hearing voices and other hallucinations. Memories of Northrend and this sensitivity have led to a deep-seated aversion to matters concerning Void and the Old Gods, often in the form of fear, or open hostility when most pressed.

Despite a seemingly chaotic exterior, Lasha is much more aware and knowledgeable than it may immediately seem. She has political interests following the Alliance-Horde War and Garrosh's tyranny over the Horde and the Pandaren. While her understanding may be a bit simplified, she has come to value democracy all the more, she is often an advocate for civil freedom. Despite her affiliation with the Alliance - which she values as the greater proponent of freedom in the world - she is not entirely belligerent to the Horde. It was for this "ideology" that she was deeply involved in the Rustbolt Rebellion, and prefers the Silver Covenant to the elven homeland that remains partly under Magisters' regime.

Lasha is also not oblivious to moral virtues. She makes a point of helping people rather than suiting her own needs, willing to sacrifice her own gain if it is focused on another's wellbeing. Furthermore, she will often place high priority on rescue and protection in military operations, rather than the execution of other objectives that do not preserve a friend or ally's life. While she revels in destruction caused by her weapons, she is not one to sacrifice friendly lives to see it happen. Rarely will she accept financial rewards for genuine efforts to help.

Above all, Lasha seems to struggle with communication, both in general and in simply expressing her actual thoughts. She rarely voices her discontent directly, instead usually bordering on tantrums when she attempts to express her problems. She has difficulty in clear emotional expression, though nervous tics such as laughter and muscle spasms are common in times of stress. 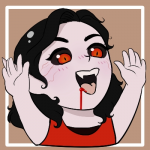