Markus Riley Quinn is an ex-military terrorist currently affiliated with theArmy of the Truthful. He was previously a Purifier for the Hand of the Unblinded.

Markus was a child of a farmer-class family, born from a Kul Tiran Mother and a native Arathi father. They settled their homes near Hillsbrad Fields a generation prior. The Quinn household was a humble one, providing comfortable means from their chief trades--tanning, butchery, leatherworking--all supplied by a tradition of fiercely competitive wild game hunting, the duty of family's patriarch.

Markus, like his father before him, carried an innate instinct for mountain-range quarry, having taken down his first mature stag not too long after learning to walk. Military recruiters recognized that this auspicious talent was not to be squandered merely on sport; he was a born soldier.

The eager young Markus left home at the earliest age his mother would permit--that being just beyond his mid-teens--to join the armed regiments of Hillsbrad, enlisting as a trainee-lookout stationed outside of Tarren Mill proper. His father enjoined the endeavor, noting his son's already firm command with weaponry and hunting experience. Needless to say, Markus was a burgeoning talent among the fresh-faced recruits.

Quinn reached early manhood during his grinding days of military rank-and-file. Upon the later years of a period following the Battle of Hillsbrad Foothills , he began to accrue many accolades after presenting his grisly trophies--personally-taken scalps those of high-bounty orcish and Amani saboteurs he aggressively subdued and slain. Quinn earned his due credit for loyal duty, rising through the ranks to eventually serve within Cellblock Stormwall.

Markus narrowly evaded death on many occasions--a recurring tendency that continues to follow him to this day--when Lordaeron's ranks began to crumble. He emerged beaten, bruised, but nonetheless alive in the aftermath of Durnholde's fall. Syndicate forces that trickled into and occupied the ruins became hazardous for the tired, still-recovering Quinn, the numerous pillagers being set upon him for the taxing weeks to come. After escaping their captivity, many days and nights were spent scurrying through broken buildings and rubble like a rat-maze, heedfully avoiding numerous flinty-eyed bandits.

One particular evening, Markus ascertained that the Syndicate had been taking prisoners from all around Lordaeron. The hunter heavily believed his son, Leighton, was in the prison block as well, and the kingpin among the ranks, Thirnas Kessler, intended to ransom the boy in order for the outlaw to be rid of the the thorn in his side.

Having been spurred into action, Markus routed out his plan of attack. With his recently gained information and scouting reports, he gleaned that Henry Stormwall, former Sergeant Major and direct superior to Quinn, was acting as warden of the cell-block under Kessler's payroll. Markus was more than eager to exact vengeance on the traitor, set the prisoner's free, and incite a riot within the internment camps, but first, entry needed to be gained.

It was then that Markus stumbled across the Stromic soldier known as Aelfric Hassler, who happened upon the hunter during a skirmish with a Forsaken assassin. After slaying the undead agent, Hassler and Quinn made a tentative alliance due to their shared vendetta against Kessler and the Syndicate.

Stormwall and the Derelict

Hassler was much more brash than the methodical, clinically minded Quinn. He wasn't much of a scout; quite the opposite, in earnest. Hassler was spiteful, full of youthful fire and the arrogance that came with it, the hammer to Quinn's scalpel. Quinn had already had years of reconnaissance under his belt, and knew that the odds were not in their favor if they had gone in a suicidal charge. Hassler chafed at this, but the ranger had already decided on employing stratagem.

The two were able to slip by the tired excavators with nary a peep of alarm from the overworked conscripts. The infiltrators had stumbled upon the the main event, it had seemed, overseen by the Syndicate's own resident witch, Janara Deichert. It was here that things would go south quite quickly, with Hassler bounding into the ring amidst a clash between starving prisoners; a mountain lion, and a Southshore guard. Markus would not pursue. He had to ensure his mission as not beset by distractions, despite his eagerness to strike at the heart of the criminal racket.

Needless to say things ended very poorly for the hot-headed Knight of Thoradin.

The smokescreen had been made, a riot erupting within the camps as prisoners broke free from their chains and traps were sprung. Though, soon, a brutal encounter would await as Markus ventured deeper into the complex, worming his way into the personal cell of Henry Stormwall, a former superior officer of the ranger. It seemed the internment overseer was in league with Kessler and his machinations.

Stormwall was a man known for his ruthless methods, and Quinn would not emerge from this bout unscathed. While he did liberate his allies within the prison cell, who aided in his clash with the angered jailer, he could not help but to feel a pang of remorse, realizing what plight his own comrades had been thrust into. Atop this, Stormwall's wife, a clerical nurse, was also stationed to tend to the wounded captives within the internment block. The woman was witness to her own husband beaten down before her very eyes.

However, Markus had no time to brood. Now with the aid of Derelict Batallion agents Leon King and Daeleth Hijaar, Kessler was slated for death, or so it seemed.

The Derelict had their own plans, much to the dismay of Hassler and Quinn. Somehow, through shadowy trickery, the exit of the prison block led right into the very pit where Kessler had staged his ambush.

The two were swiftly cut down, as the assassin had no intention on entertaining a prolonged brawl with two beaten dogs. The shadows parted, and things became urgent. The Derelict had already begun to run amok, adding more fuel to the flame that was the uproar in the camp. Though only briefly displaced, Thirnas decided to let the zealots set fire to what was already a set of ruins. Enough was extracted from this racket.

Hand of the Unblinded and Reverus

Heavily scarred both mentally and physically, Markus would never be the same after suffering the harshest defeat he had ever known. His captivity within the Crusade warped his mind beyond redemption. Feelings of guilt and failure were amplified by the inquisitor's draconian methods, and eventually the hunter was posed a single, penitent path. There was no other choice than to serve the Crusade.

Among the Purifiers, his cold and ruthless skills as a huntsman were utilized and honed even further. Even with half of his vision now gone, Quinn's talent and instinct remained, making him just as lethal as he ever was, if not more so, having been stripped the few moral scruples he once carried.

Quinn continued to survive and stalk the now recovering woods of the Western Plaguelands around Andorhal, most of his Scarlet compatriots being scattered or killed. Withering sanity and violent spite lingered on the grizzled hunter long after the Crusade's occupation, trapped in an endless and insatiable hunt, maligned against most denizens of the post-Shattering, cleansed Lordaeron woods. Making quarry of these innocent lives in a terrorizing spree, Quinn is regarded as both a dangerous outlaw and a war criminal, among the many other indictments cast upon him.

Markus was instrumental in the arming the emerging reign of terror the Truthful visited upon Stormwind in mid 35 L.C. As a veteran in siegecraft and guerrilla warfare, he was apt to lead the southern infiltration. Since then, he has become a wanted criminal by Stormwind Intelligence.

After being missing for months, the Truthful had managed to reunite with Markus within the Uplands. He had been trapped there since the initial Legion Invasion of Hillsbrad, on the run from many different enemies--demons, Legion cultists, Syndicate, Alliance, and the elements themselves. The Scarlet forces had begun to strike against the Syndicate, a much maligned threat within the green valley below the Alterac Mountains, and earned favor among the the locals off Allsbrad. Having already allied themselves previously with Crusader Buckbrook, they were rather quick to win over when it came to whose ultimate allegiance would be sworn. Quinn promised to arm them against the rapacious Kessler Estate, and with Lady Kessler herself cooperating with both Uncrowned and Alliance forces, they were eager to bear the Truthful's banner.

The farmstead lied in wait as Quinn and Buckbrook coordinated the attack. Uncover SI:7 agents had underestimated the firepower Markus had brought along with Saxon Paige's retinue. Needless to say, the threat was easily thwarted, and Quinn was poised to strike the hive of his main foe in Norlaran.

Markus remained in hiding during a period of dormancy for the Truthful. It wasn't until his son, Leighton Kercher, became a Baron of Newhaven. Angered that his child abandoned his identity, Quinn arrived in Duskwood along with an old acquaintance, Nemond Eastmirror, in order to negotiate with Leighton. The son, however, was not on speaking terms with his father. Leighton immediately engaged the two crusaders in combat, managing to injure Eastmirror before being shot in the knee.

Leighton was subdued thereafter, leaving Markus to meet his son's resentment with disappointment. For a brief moment, however, the old hunter saw a grim reflection himself as he ordered Eastmirror to punish the agent. A pang of regret overcame Quinn, and he forcefully kicked the purifier aside. Leaving Leighton to stew in a bloody pool, the crusaders departed promptly.

Witches of the Woods

A Meeting of the Minds

Breaking the Cycle of Guilt

The hunter primarily remains adrift in the Eastern Kingdoms. With Vulture Zeke out of his way, Quinn has since found his way to Allsbrad. Having caught wind of Scourge threats emerging, he plans on finding his scouting partner in Silverpine Forest. 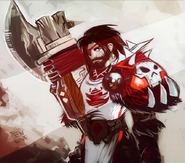 Render by mig.
Community content is available under CC-BY-SA unless otherwise noted.
Advertisement