The Order of Everstill maintains a high standard of excellence for all of its members. This excellence is reflected in its membership as many of its members hold positions within Alliance High Command. Over the years, the Order has become one of the Alliance's most prestigious military orders, being the home to not one, not two, but five separate recipients of the Alliance Legion of Valor, (and one double recipient), a feat unimaginable when most other knight orders do not have a single recipient, much less two. In the past, the Order briefly served as a militant hand of the Church, acting as the Noble Guard of the Archbishop.

The Tome of Elites

The Everstill Tome of Elites, informally known simply as The Golden Tome for its golden colored cover, is the book that records the deeds of every knight who currently serves or perished while serving the Order of Everstill.

The tome is currently kept near Everstill Manor, in the Tower of the Everstill Council. The tome is in the uppermost floor of the tower in the middle of the council table where the Knights of the Order convene. It is the responsibility of the current Order Master to update the entries in the book. Note: Prior to the conclusion of the Third Burning Legion Invasion of Azeroth, the tome was kept in the Royal Library and maintained by Royal Historians through the instructions of the Order Master.

Each knight who has been made a member of the Order since its inception during the War against the Iron Horde has a page within the book detailing his achievements. If available, each entry will include a painted portrait accompanying it.

Any knight that left the Order or was expelled from the Order had their respective page(s) purged from the book.

"Sir Alexander Verdun was knighted at the age of twenty by Lord Cathael Adamar. For his willingness to sacrifice familial ties in order to serve the Grand Alliance, he was dubbed the Warmongering. He served valiantly through multiple campaigns such as the Second War, Pandaria Camaign, Draenor Campaign, and Argus Campaign. For his actions in the Draenor Campaign as well as the Argus Campaign against the Burning Legion, he was awarded the Alliance Legion of Valor, twice, naming him as a Hero of the Alliance. He currently holds the rank of Grand Marshal within the Alliance Army."

"Sir Kavid Thorson was knighted on his twenty-third nameday by Lord-Marshal Adroby Relindor. For his bravery and resolution in battle, he was dubbed the Loyal. Prior to his induction to the Order of Everstill, he served as a guardsman in the Capital and he served in campaigns such as the Draenor Campaign and Argus Campaign. For his actions in the Draenor Campaign, he was awarded the Alliance Legion of Valor, naming him as a Hero of the Alliance. He currently holds the rank of Field Marshal within the Alliance Army."

"Sir Dexter Gates, nicknamed Dextros by the soldiers who served with his Uncle Meltros, was knighted at the age of twenty-one by Lord Luther Maxwell of Stormwind. For his expertise and aggressive nature in battle, he was dubbed the Bold. He served valiantly in multiple campaigns such as the Pandaria Campaign and the Draenor Campaign. For the menacing visage of his armor and flaming greatsword, he is often referred to fearfully by both Horde and Alliance forces as the 'Furnace of the Alliance'. He currently holds the rank of Commander within the Alliance Army."

"Sir Damond, knighted at the age of 42 by the great Eligor Dawnbringer as a Knight of the Silver Hand, fought valiantly during the Second War, as well as the Third War. He fought on with the rest of those venturing through the Dark Portal in order to establish a foothold for our Grand Alliance in the Outlands and upon his return he resumed his duties as a Knight of the Alliance and aided Alliance troops in the siege of Icecrown Citadel. For his strong will he was dubbed the Unbreakable. For these reasons, he has been selected to serve in the Order of Everstill, to serve the holy Light and the divinity of His Holiness in our everlasting watch over the Redridge Mountains and his Majesty's lands."

"Xaljorn Dwal'bjorn, a Thane in Training of Dun Bjorn from the Magna Modan Clan, served valiantly in our Grand Alliance's attempts at establishing a foothold within the Outlands and marched upon Icecrown Citadel as well as Operation:Landfall. With the invasion of the Iron Horde, the Thane in Training of Dun Bjorn has marched into Draenor in order to aid our Grand Alliance. In recent years, he has also aided a trading caravan of House Verdun's from the fire elementals of the Searing Gorge. For his honor and valor, he is to be recognized as an honorary Knight of the Realm in the name of the House of Verdun as the Stout."

"Sir Tylralus, knighted at the age of 22 by his Father, Lord Jarltor Volkein, served valiantly during Operation: Shieldwall, aided the Heroes that defeated Garrosh Hellscream during the Siege of Orgrimmar by maintaining the line behind them, and recently with His Majesty's Vanguard in Draenor. For his outstanding tenacity in pursuing the Holy Light, he was dubbed the Relentless."

"Sir Corren, knighted at the age of twenty by his own father, Lord Carac Caleborn, served valiantly throughout the Second War against the Horde from the Siege of the Capitol to the Battle of Blackrock Spire. Following the war, he served as a member of the Silver Hand; his actions at Plaguemist Ravine saved hundreds from the wrath of the Scourge. His campaigns included the Qiraji-War, Northrend, and the Siege of Orgrimmar before holding the Broken Front in Draenor until the recent assault of Hellfire Citadel. For his bravery and resolution, he was dubbed the Stalwart. He currently holds the rank of Commander within the Alliance Army."

"Sir Korben Rivers was knighted at the age of twenty-four by the late Lord Quincy Denholm, a Loyalist supporter of the crown and the Church of the Holy Light. For his battle prowess and his valor in combat, he was dubbed the Wild. He served valiantly during the Gilneas Civil War and the Battle for Tol Barad. He also served in campaigns such as the Pandaria Campaign, Draenor Campign, Argus Campaign, and the Blood War. For his actions in the Blood War, he was awarded the Alliance Legion of Valor, naming him as a Hero of the Alliance. He currently holds the rank of Field Marshal within the Alliance Army."

"Sir Clarence Cunningham was knighted at the age of thirty-one by Lord Miles Avery. He was born to a good family in Westfall and spent his youth as a squire yearning to protect his kinsmen as a Knight of the Realm and as such he overcame many obstacles and horrific tragedies that befell him and his family, bringing honor to his name. For his resolution to always speak the truth, he was dubbed the Honest. He served valiantly in multiple campaigns such as the Northrend and Argus Campaigns. It is rumoured that he holds a particularly high position within SI:7; however, those speculations have yet to be proven. He currently holds the rank of Marshal within the Alliance Army."

"Bloodlord Ni Crimsonsong was once a loyal subject of the Sunstrider Dynasty of Quel'Thalas and Champion of the Silver Covenant until his untimely demise at the hands of the Scourge. He represents the Knights of the Ebon Blade and has pledged his support to Vereesa Windrunner and his High Elven brethren, putting his deadly skills to use in serving the Grand Alliance. For his brutish behavior and unyielding spirit, he was dubbed the Dreadnaught. Upon his return to the Alliance, he has served in campaigns such as the Draenor Campaign and Argus Campaign. He currently holds the rank of Field Marshal within the Alliance Army."

"Lord Jarltor Volkein inherited his ancestral home of Aldervale at the age of 25, and served loyally under the reign of King Terenas Menethil II. In a heroic act of sacrifice, Volkein gave his life to save his kinsmen during the Scourge invasion of Lordaeron. To this day, the Grand Alliance benefits from Volkein's service and thanks him for beating back its enemies in the Orc Homeworld of Draenor, and on the Broken Isles. For his unwavering devotion to the cause of humanity and his fearlessness in battle, he was dubbed the Stoic."

"Lady Zaria Triton inherited her titles and holdings from the late Lord Martin and Lady Evelynn Triton. She has displayed unparalleled courage and strength in the face of calamity. After serving in the Third War, Northrend campaign, and Lordaeron reclamation efforts, she retired to her home in Arathor. For her noble efforts and unwavering determination, she has been dubbed The Bulwark of Triton."

"Soulhunter Ui Hellsoul, Champion of the Illidari and ambassador was a pious Priestess of Elune until the ancient invasion of the Burning Legion at the Well of Eternity. For her unwavering determination in face of insurmountable odds and mystifying presence, she is dubbed the Veiled. Ui has pledged her allegiance to her Kaldorei kin, despite renowned terror for her felborn form, putting her potent demonic skills to purpose in service of the Grand Alliance. Considerable deeds of self-sacrifice on the shattered world of Argus and unparalleled viciousness in the face of Sylvanas’ Horde in Feralas spelled victory for the Alliance and Azeroth collectively, earning her the respect of several ranking peers under the King’s banner."

"Sir Garion Magnus was knighted at the age of twenty-seven by Lord Nathul Furlbrow. For his compassion and offering of aid to the poor and common folk of Westfall, he was dubbed the Kind. He served valiantly in several campaigns such as the Draenor Campaign, the Argus Campaign, and the Blood War. He currently holds the rank of Commander within the Alliance Army." 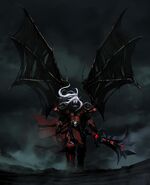 Ranks within the Knights of Everstill

Order Master is the title given to the leader of the Knights of Everstill and is only a formality. The Order Master has very little power within the Order itself other than the ability to appoint Council members and induct new knights into the Order.

Order Members are commonly referred to as "elites" and typically what everyone within the Order is considered to be, having met the steep requirements for acceptance into the Order as well as maintaining a high standard of excellence.