Emma "Peregrin" Sophie Ramsey (born 16th September 17 L.C) is an Officer and Squallrunner in the Proudmoore Admiralty. Serving as second in command of the Reconnaissance Division within the Kul Tiras Tenth Fleet and Recon lead of the L.A.S Thane. Born within the walls of Kingdom of Gilneas the half-elf soon found herself settling in Kul Tiras.

Standing a whopping 5'0'' the slim Half-Elf has a more human appearance compared to many of her kind. The main give away to her Quel'dorei heritage is the much more larger and slender knife like ears, and those glowing light blue eyes. Her hair is bright fiery ginger this lead her to gaining the nickname of Firebloom from Whelynn. One of her most striking features is the two slash marks over her right eye. Scars from a Worgens claws, she had been just lucky enough to turn her head out of the way in time, and managed to keep her eye and her vision.

Going on daily runs Peregrin keeps herself in tip top shape! Such is life within the Navy and being a Squallrunner. She is slim, yet toned and used to once pride herself on being able to slip into the most tight of spaces back in her thieving days. If she needed to escape through a small gap, she was usually the one able to do it! Needless to say she was destined for Recon. She is sadly heavily scarred from her deployment in Northrend thanks to a Frost Wyrm's claw, the deep nasty mark running up the length of her chest. And several acid burn marks splashed over her skin, after the creature exploded in its defeat.

Peregrin is far too trusting for her own good. She is the type that chooses to see the best in everyone she meets, even some Horde during her deployment in Northrend as a Cadet. More often then not this leads to her getting burned and hurt in the end. Be it by losing the person in death, or betrayal. Giving she spent so much of her life locked away to be unseen, she can be somewhat timid and shy. She is loyal and would do anything to protect her friends and family (which includes those she works with).

At times she tends to close off, and retreats into her head a bit. Often thinking about what she should of done over what she had done. Such example being when she lead for the first time as Sergeant a very close friend died. Even though he was revived, this still haunts her. Though that being said, she is a very passionate and caring woman. She is very quick to follow orders, and respects the chain of command within the Tenth Fleet. She still struggles to see greatness in herself. She is constantly trying to prove herself to all those around her, and those who have questioned her military service. Though some may say she had it handed to her on a silver platter, she would tell you she bled and died for her homeland and her people.

But once her trust is lost, it is very hard to gain back. There is a fire that burns within Peregrin, right now its a tiny spark. But one day it will roar into a mighty inferno.

"The flower that blooms in adversity is the most rare and beautiful of all." - Mulan

Bastard child of Jaren Ramsey of Gilneas and Astaroiel Dawnstrider a Quel’dorei Ranger. For Peregrin life had never been easy, her mother trusting that her father would raise her, keep her safe and loved had been betrayed from the moment Peregrin had been left on his doorstep. She spent the first twenty years of life, living a lie. Her father forced her to wear an illusion to hide that she had elven features from the world. Mostly because he couldn’t stand looking at her and being reminded of her mother. Jaren found no use for his daughter, so he locked her away in her bedroom for many years. At the age of fourteen the fall of Gilneas caused her father to flee the city with his family, including the then young Peregrin. Together they fled to Brennadam in Kul Tiras, and once more she was kept captive. A strange saving grace of the Horde invasion of the township would be the cause of her freedom.

After the invasion of Brennadam, Peregrin found herself living on the streets of Boralus and its surrounds. It often meant she had to fight for her next meal, but it was something she was willing to do. Though not all of her time homeless was spent alone, while in the mountains above Boralus. She found a wounded gryphon in a poachers trap, freeing the creature she found herself a life long friend and companion. The gryphon now named Tidesong became protector, on the cold nights in Boralus he would often curl around her keeping her warm and safe from those who would do her harm.

Before long the young woman found herself struggling to even get by, tired of a life of thievery, a life of feeling like nothing she had wanted to put an end to it all.

Getting word of the campaign in Northrend fighting against the scourge and pushing them back to Icecrown. She figured why not, at least if she was going out she would go out fighting for something. There she would find the Tenth Fleet of Kul Tiras, signing up as a Cadet. Peregrin from there would fly through the ranks from Cadet to her most recent promotion to Lieutenant of the Reconnaissance Division and second in command under the watchful eye of Captain Kalbern Crowe.

As a Cadet, Peregrin never expected to be tossed into the "deep end". But she had signed up to the Tenth Fleet on the grounds, that she hoped she wouldn't last two long. That at least was till she began to find something worth fighting for. Kul Tiras and the Tenth Fleet.

Though she had not expected the untold horrors that she would witness, fighting against the Scourge. She saw winged creatures she soon would find out were called Mawsworn. Her first taste of battle on the grounds of Corp'rethar, she saw this creature for the first time, watched as it tried to suck the very life out of all those around her. Even watched as one of the Tenth's Commanders remained risking themselves to make sure all the Alliance forces retreated. It was also the first time she had truly felt herself freeze in terror.

Northrend was the first time she had been seriously injured, she had taken a claw to the chest by a Frost Wyrm in place of one of the Tenth's healers during another battle protecting the camp at Argent Vanguard. It was the words of one Sergeant Merry Rogers, that she was to protect the healers and the Tidesages. Those words have never left her, to this day she continues to do her duty and protect all those who serve under her. The healers most of all, for without them they could fall.

She arrived in Northrend a terrified Cadet that needed protecting. She would leave a Cadet willing to fight for her new found family and her chosen homeland of Kul Tiras.

The Defense of Stormwind

During the most recent rise of the Scourge during an attack upon Stormwind Harbor Peregrin took a rather nasty tumble on ice formed by a Frost Wyrms breath attack, causing her to smash her head against the cobblestones. This in turn caused a very deep split on her skull, but being as stubborn as she is. She got to her feet again rather quickly only to take what many would call a "Killing Blow" from the very same Frost Wyrm as it breathed an attack over many of the Tenth Fleet and others defending the harbor from harm. This is the attack that claimed her life for the first time, but thanks to the quick thinking of one of the Tenths Medics, Rowyne Fletcher she was taken to the Stormwind Cathedral and her life was returned to her.

She still suffers from a slight shake/tremble to her left arm, but it is something she has control over. Having been given daily exercises from Lt.Commander Dunstable Pryde.

For Peregrin family is not blood, family is those she lets into her inner circle. Be them a close friend or a co-worker. The Tenth Fleet is also to her a family, they have accepted her as she is. She has no reason to hide who she is anymore, and not from them. Many within its ranks she would give her life for, simple as that.

A wild gryphon she saved from a poachers trap near Norwington Estate in Tiragarde Sound. After nursing him back to health from she and Tidesong formed a strong bond. Many have said the bond is as strong as that of a Wildhammer Dwarf and their gryphon companions. She and Tidesong have an understanding of each other, to the point they seem to have their own language. He is loyal and protective of his rider, but somehow is easily bribed with apples which was found out by one Sergeant Alexandre Abercrombie. And while Peregrin was missing in action within Ardenweald Lieutenant Whelynn Dunn-Ayers and Chief Petty Officer Rowyne Fletcher took care of him and kept feeding him pastries a now forbidden snack for the large creature.

Tidesong has proven himself to be a worthy member of the Tenth Fleet over his years of service, having plucked many out of harms way and coming to the defense of others with the help of his master.

For Peregrin, family is something limited. Giving how she was brought into the world and raised, she felt that she couldn't ever call someone family. During her time in Northrend, the then Private Dunn-Ayres was tasked with looking after the then Cadet Ramsey. To this day Peregrin sees him as a brother, he is one of the very few she has allowed into the inner circle of her life. And she is very much the annoying younger sister when it comes to Whelynn.

Even during the most recent Scourge invasion of Stormwind City, she threw herself into an attack from a Frost Wyrm directed at Rowyne Fletcher which claimed her life till healers worked hard at reviving her, just so that her brother wasn't hurt when the woman he cared for could possibly die. Foolish? Maybe but its something she would do for anyone. 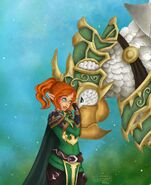 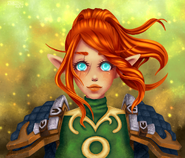 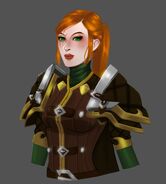 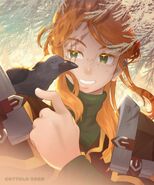 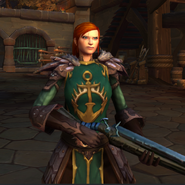 Retrieved from "https://moon-guard.fandom.com/wiki/Peregrin_Ramsey?oldid=285810"
Community content is available under CC-BY-SA unless otherwise noted.