"I Need To Become The Man I Was Born To Be. Not Tomorrow, Not Next Year. Now."

Proclus Clement is a Human born in the outskirts of Stormwind City. Recently, he was dealing with rebels in the South of the Eastern Kingdoms but will soon be reassigned to serve again in the Stormwind City Guard (24th Regiment) as Sergeant. Well known for his unbending loyalty to the Crown, Clement's duties come before anything else.

Proclus Clement was born over two decades ago in Northshire Valley. Growing up in a humble family, he didn't have much to do in his young childhood. His father was a Woodcutter and his mother a Maid to a wealthy noble family in the Capital. As a child, he would spend his days following the soldier patrols, befriending them for years until he realised he wanted to become one of them. He'd follow around a stick, imitating them as they sparred in the plains around Goldshire. Otherwise, apart from the dreams of becoming a soldier, he would help out his father with woodwork. By the age of 15, the young Clement was already well-built thanks to the years of hard-work his father had given him and some luck with genetics. On his free time, when he started becoming more and more mature, he decided to turn his dream into ambition.

Until he reached the age of 17, he would train 3 hours a day the Arts of Swordsmanship with his neighbourhood friends and the Arts of Bowmanship by hunting game to feed his elderly parents. However, his father disagreed with his son's wishes to serve in the military. This was due to the traumatising experience he suffered during his own service: seeing his friends get killed, injured and sometimes tortured. After months of arguing, Clement couldn't stand it anymore. He manifested his hatred for his father's despise of the military, seeing it as cowardliness and left the household once and for all... Not understanding that his father was trying to protect him from harm.

He was days away from turning 18 years old when he left. Thus, he applied to join the prestigious Officer Academy of Stormwind where he would hope to study Leadership and serve in the army as an NCO. Unfortunately for him, things didn't go his way. There were far too many applicants with much more pompous backgrounds a.k.a. decedents of knights and military officers. Out of options, he enlisted as a normal infantry man and was assigned to the Stormwind Stockades.

During the following months, he would spend his time there dealing with Riots, Hostage-Taking situations and Murder Attempts. After all, the prison was home for the worse types of criminals of Stormwind. One day, he was assigned to clean a cell from blood that had been spilt during a brawl between inmates. While he was getting his hands dirty, his Stockade tabard bloodied, Lady Rose passed by. The renowned Lady was inspecting the cells. Stunned by the draenei's beauty, he immediately stood up and saluted her. At that particular moment, Rose smiled at him alongside a quick nod and went on with her day. Surprisingly, after this encounter, Clement's higher-ranking officer informed the young man that he was to be reassigned to become a Recruit for the 24th Regiment. Full of joy, Clement realised that Rose had offered him the opportunity of a lifetime.

Thrilled, he changed from his rusty Stockade Tabard to a complete Armour Set that the Regiment's Quartermaster had given him. He then signed the papers of enrolment and started a new journey as a true Soldier in the Stormwind City Guard. Since then, years have passed and Clement has risen above the Recruit rank. Now, he serves as a Sergeant alongside his brothers-in-arms and sisters-in-arms to uphold the sacred laws of the City.

Recently, during an open ambush in the streets, Clement was bit by a Worgen and became cursed to become one as well. Today, he stills tries to control his curse and only uses it when he is in danger. Otherwise, he can always be seen in his normal Human form.

A few months ago, General Karzak of the 12th Infantry Regiment was assigned to deal with a rebellion in the North of Westfall. Lacking the men to go and deal with the threat, he asked the Crown for reinforcements in his task. Upon his call, many officers from other Regiments were assigned to join the 12th temporarily. One of these officers was Proclus Clement, who was currently serving as Sergeant in a Law Enforcement Division of the 24th Regiment (Stormwind City Guard). Packing his gear and preparing for the voyage, Clement willingly went with a desire to prove himself once again to his higher-ranking officers and the Crown.

A few weeks had gone by, the regiment was marching throughout the East with fierce determination on foot until they reached the conflict zone. When they arrived Clement got a debrief of the situation in a meeting with other low-ranking officers. They were told that the Lord of a certain village in Westfall had decided to increases taxes on his people in order to supply his garrison and expand his fief's (castle) outer walls. The policy put in place didn't go unnoticed with riots arising and soon enough, blood spilling. The outnumbered local garrison could not deal with the rebellious villagers that started besieging the Lord's estate and setting fire to crops. Therefore, in emergency, he sent a letter to the Capital seeking help in the manner. After all, this landlord was a Bannerman originating from Stormwind and was in the right to seek help.

As soon as the letter was received, General Karzak got his men ready and headed to the village where most of the rebels were stationed. His mission guidelines were clear: Stop the rebellion, collect the tax due and ensure no future rebellion will arise any further. Many of Kazrak's subordinates suggested an arrest of rebels with some executions to calm down the riots. At first, this strategy was put in place but to no avail. Growing impatient, the General Karzak ordered for his men to enter the village, slaughter the men and gather the women and children in the village centre. Alongside ordering such a massacre, soldiers were to burn down the huts to the grown, dismantle stone houses and gather any resources that could be used to pay the Lord's tax.

Some men refused to carry out such orders, but as soon as the General learned of this, he ordered them arrested and swiftly executed for treason. Clement wasn't one of these men, he was absolutely loyal to the Alliance and his higher-ups. And so, he marched on the village, leading 5 recruits behind him to enforce the law.

The slaughter began. The peasants were no match for the regiment, only armed with rusty blades and forks. Quickly, the men were cut down one by one in front of wives and children. Clement acted with no remorse whatsoever, orders were orders, pity was not in his agenda. Once the children and women were gathered in the Square, Karzak arrived with a few retainers, he dismounted and gave a speech about how "Rebellions were like a snake with 3 heads and cutting only a head off would only leave it more time for two more to grow.". Following the speech, he stabbed a woman in the chest in front of her child and then punched the little boy to death. At that moment, many of his men lost faith and dropped their swords. Clement was one of these men. However, Karzak was too busy with his bloodlust. The madmen that followed him rushed onto the innocent with their bloody swords up, finishing what the General started. 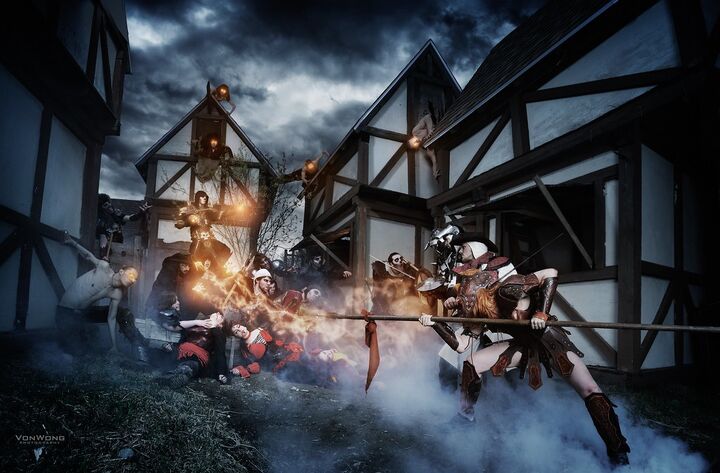 Once the massacre was over, the Regiment headed back to Stormwind. Clement was awarded a medal of honour and a medal of courage. Digusted by this, he took the medals and threw them in the ocean near the port. He wouldn't leave the military, but was now traumatised of his experience on the front. He swore to himself he would now firstly protect his people before mindlessly following orders.

Clement is now back in Stormwind, assigned to the 24th Regiment once again.

On one hand, Clement is a reserved man. He doesn't talk unless he has to or if he enjoys the person's company. Some might take this as being cold, but in reality Proclus simply enjoys letting his thoughts wander off as he smokes a cigarette. He is very genuine, fiercely loyal, respectful, straightforward, cunning and has a strong work ethics. These ethics are based on the military's moral code. It serves as a religion to him, as he doesn't believe in God(s), only in Mankind.

On the other hand, Clement is also a passionate man, which can make him jealous and angry at times. He gives himself to the fullest when working to achieve his goals. These goals are to mark his name in stones of history as a successful military man and to find someone he can truly love and build a family with.

Throughout his young life, Clement has always enjoyed the company of strong, beautiful and cunning women. After a few relationships, Clement has recently realised he had been next to the love of his life since the beginning. Being a hopeless romantic in nature, he sincerely hopes he can convince that person of the feelings he bares deeply within and that she will accordingly reciprocate.