At some time after the Third War and the rebuilding of Quel'thalas, the Wayward Children would grow disgruntled by the direction the new Blood Elf Empire was taking. Unhappy with the police state and silencing of political dissidents by the powers that be, the majority of their more conservative members would break away from the Sin'dorei Dominion and go off on their own, becoming a mercenary company of former High Elven Farstriders. The Wayward Children would continue on this path for several years and conflicts as an Alliance affiliated company before being forced to be absorbed by the Silver Covenant during the conflict in Pandaria. 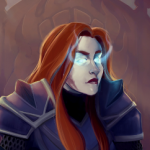