Quill has messy Jet Black Hair, about 5'8 FT, his walk is heavy as if there is something that weighs him down. His face is narrow and his eyebrows show of someone who has been through a lot even from a young age.

He wears armor that is unique for him, and he crafted the armor himself.

Light of Hope initially created by Marcus Alanmorn, a Paladin of the Order of the Silver Hand; the sword was later passed on; The time of its creation, it was infused with the power of the Light and was one of the blades that looked identical to that of the Ashbringer but were not as powerful. It is now the preferred weapon of Quill Alanmorn, and he used it during the Fourth War in the Final Days of the War

Born in Stormwind (Or so he thinks) to two bakers, Quillarsh Alanmorn wanted to be a soldier. During the attack on Icecrown, Marcus Alanmorn, his Grandfather, went missing after being attacked by Death Knights at Ice Crown Citadel.

Since then, he had a distrust of Death Knights. His sister became a mage of the Kirin'Tor, while Quill became a Paladin to protect the people of the Alliance using the power of the Light.

He fought in many battles, including the Battle of the Broken Isles (His first battle). He saw as King Varian Wrynn, the Leader of the Alliance, sacrificed himself to save himself and others. He was once part of a division in the Alliance Military, but he left after becoming a more medical division. He then fought in the final battles of the War against the Horde but did not participate in Orgrimmar. Now the scourge run rampant across all of Azeroth.

When he was young, he would watch the Soldiers fight, then one day, a paladin spotted him and asked Quill to be his apprentice; he accepted and was indoctrinated into the Order of the Silver Hand.

Born into the Alliance

Being raised in Stormwind has its advantages; being born into the Alliance, he would know every street of each part of Stormwind by heart, and even he knew in his heart that if Stormwind falls, the Alliance falls, and he would make sure he people were defended. Even if his life would be sacrificed through his own free will and through the Light's grace.

Paladin of the Alliance

The title was given to him by the people of the Alliance as he walked among the people in the Alliance far more times than he would like to admit. He had earned through protecting his people and bring retribution on the wicked that got crime onto its streets.

The Battle of the Broken Shore

During the events at the Broken Shore, he witnessed King Varian Wrynn's death when he sacrificed himself to save the men on the Gunship, including his own.

His story truly began to take shape as he realized that he would bring retribution onto the wicked. Specifically, members of the Horde that agreed with Sylvanas. Near the beginning of the war, he was put on reserve; he left his unit near its end. During this time, his fears were of becoming like Arthas Menethil began to take shape. He feared becoming like Arthas so bad that after the war's end, he went to Niklos Adamant, a Cardinal of the Remnant of Lordaeron, to confess his fear and get some advice.

Now with the Scourge on the loose. More afraid than ever, now desperate to try and prove that he is not Arthas. He saw the Death of Nathanos Blightcaller from afar and told a Death Knight about it. It was at this point where during the Scourge Invasion, that he talked with a Death Knight named Griefgrave and finally got over his prejudice of Death Knights. Now his fears of becoming like Arthas are still there, but he still needs to overcome his fear and eventually get rid of his arrogance... For good.

When it was revealed the barrier between Azeroth and the Shadowlands was broken, Quill decided to step up and enter the Shadowlands, he eventually entered into the service of the Archon of Bastion where he learned of humility a bit more and became a bit more wise getting rid of his arrogance for good. During this time he had learned of his Grandfather's true allegiance to the Jailer and the Mawsworn. During the Events of Castle Nathria, he helped Bastion against the Forsworn and discovered Uther the Lightbringer was one of the Forsworn which saddened him a great deal. He returned to Azeroth to eliminate his own Grandfather, they had their final confrontation.

This is where he killed his Grandfather and freed him from the Jailer's control, in his last moments. Marcus uttered the same words that Arthas did in his final moments "I see, only darkness, before me." This would have been Quill's fate if he had joined the Jailer's cause. He then proceeded to go back into the Shadowlands as his work was not over. When he returned, he saw his sister in Oribos, ready to defend Azeroth and the Shadowlands. He also saw his father as a member of Maldraxxus finally reuniting with his father at last. His father told him that he was so proud of him, he also told his son the truth about himself, that he was once a soldier of Stormwind before his retirement, he then proceeded to enter the Maw to see horrors for himself, he also discovered Anduin Wrynn was kidnapped after he escaped the Maw.

One time he was on Azeroth the Shade of Neltharian the Earth Warder, he thought it was wierd. He even scoffed at Quill when he said that it was so. Eventually he learned of his true heritage and learned that he wasn't even an Alanmorn, but in fact was adopted by his family and he had slain his true father while in the Maw and learned that his true mother was a Maldraxxi soldier, he questioned his father about and asked why he didn't tell him. This was what his father was afraid of but he answered "Son, I feared for this day for a long time, I didn't expect this but, your mother gave you to your mother same with your sister to us so that we can raise you properly, your mother had a hard life, even had a secret marriage with a woman, Elena, your birth father was not kind in fact they were never even married, he did horrible things after you were born and now he is gone for good. Your mother loved you so much but she could not raise you because of the amount of money it would take to raise a child and that is why you were given away; to protect you." When he said that Qull realized that family is who raised you, not blood ties. Another step in his journey was taken.

The Stage was set for his final battle, the climax of his story. Facing Sylvanas Windrunner, former warchief of the Horde and Champion of the Jailer and to Quill the one who caused so much pain for his people and for him as she abandoned Varian during the Battle of the Broken Shore. But first he needed advice, so he went to many different places. He knew if he only did it from one place, it would not end well. First he went to the High Priestess, then to Turyalon, and then toward others. This would eventually help him later on down the line.(WIP)

He once had a prejudice against Death Knights, and that thankfully passed when he talked to a Death Knight of the Second Generation. Once Quill had a bit of arrogance and pride which never hurt, now he is a humble man and is wiser than his age; he is actively trying not to give in to his vanity. But at times, it is hard, but he perseveres. He also has very little time for romance unless the right person comes into his life. He continually goes to the Light for answers; at times, it does not answer; at times, it does.

He serves the Light, but he also believes that the Alliance is better than the Horde. He thinks the Horde are savages but understands the necessity that the Horde is needed in defense of Azeroth

He prefers to be by himself when not in a battle. When in battle, he follows his superiors' orders. That has slowly started to change as he has become more and more aware of the people.

Quill and his father didn't see each other much because of his father's job, and in secret, him practicing to become a warrior, but when he became a Paladin, he made his father proud after he passed away.

Crillaidie and Quill have very different views regarding the Orcs; Quill believes the Orcs to be savages that have to be put down. While Crillaidie, on the other hand, believes that the Orcs have hearts and think that they can be honorable and even brave at some moments.

Marcus and Quill are not in the best relationship as Quill knows now that Marcus is a Death Knight and a Knight of the Ebon Blade. In Quill's mind, Marcus had become everything Quill hated ever since Marcus' supposed death at Icecrown Citadel. It has only gotten worse since he learned of his true alligence to the Mawsworn.

His adoptive mother passed away some time before the Legion Invasion events, but they had a good relationship. They had one of the best mother and son relationships in the world of Azeroth, at least from Quill's perspective.

He never met his adoptive Grandmother; that was the worst thing. The missing piece that is there, which was why he was so alone.

He never knew his true mother, it was a sad tale to be told but she could not raise him. But she did have some Kul Tiran blood in her.

His true father's soul was destroyed in the Maw by Quill and was one of the guilty souls cast into the Maw and turned into one of the Jailer's pawns. 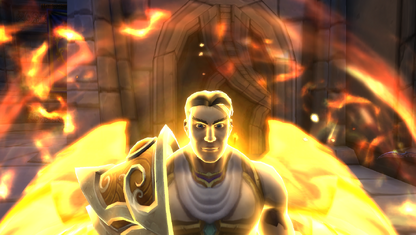 Retrieved from "https://moon-guard.fandom.com/wiki/Quillarsh_Alanmorn?oldid=286203"
Community content is available under CC-BY-SA unless otherwise noted.