Robin Fraser (born 22nd February L.C) is a Corpsman and Thornspeaker within the Proudmoore Admiralty within the Kul Tiras Tenth Fleet and stationed upon the L.A.S Serendipity.

Born the first and only child of Commander Douglas Fraser and his Thornspeaker wife Olivia Fraser. The first ten years of her life were idyllic within the township of Falconhurst in Drustvar. Her father split his time between the small settlement and the Proudmoore Academy in Boralus. Her mother, a kind soul, served as the local healer for many of these years, till the covens began rising up once more. While her father was away on a mission to sea, her mother was tried for witchcraft by the local witch hunters and hung. When her father returned only to find out his wife had been killed, he whisked his daughter to Boralus to be brought up near the Academy. The death of her mother gave her the path she wished in life to become a Thornspeaker in her stead and become as powerful as possible. The Worgen in her thirsts for the revenge of her mothers death, but the love of her father keeps it at bay. Much to her father’s dismay she is also following in his footsteps by joining the Kul Tiras Navy within the ranks of its Tenth Fleet. Don’t go telling him..

Shortly before the 4th war the young Thornspeaker was with a group of her friends within the area of Freehold scouting for Seastalks along the coast where they were set upon by a group of pirates. During the scuffle, Robin found herself being bitten on the arm by one of their “guard dogs” a feral worgen. Of course this resulted in the young Thornspeakers affliction or “curse” as many see it. For Robin at first it was a little hard to manage, she found herself shifting at a drop of a hat when it came to getting frustrated or angry. But with the help of the Thornspeakers, she soon learnt how to get a handle on the feral side of herself. Sometimes though she tries, pure rage is the only thing that can really set off her shift unwilling. More often than not she uses it as an almost boost of her powers. The connection with her other self has given her a closer bond to nature and the world around her. Giving her a better understanding of her emotions, even if at times it threatens to consume her. At least, this is the story she tells people. 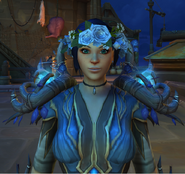 Retrieved from "https://moon-guard.fandom.com/wiki/Robin_Fraser?oldid=285770"
Community content is available under CC-BY-SA unless otherwise noted.