Lady Seriphene Andorii Vanyali (née Silverfall; born June 5th, -476 L.C.) is the reigning Duchess of Quellorian, as well as a high ranking officer in the Grand Alliance. She serves as Commander of The Silverguard and is the current Chairwoman for the Silver Convocation.

Well dressed, intelligent, confident, and even arrogant. These are all words that have been used to describe Seriphene at some point or another. Her icy blue eyes have a certain sharpness to them that work well in tandem with the softer facial features she possesses. Her platinum blonde hair is usually drawn back in a ponytail, preferring a practical hairstyle day to day.

Seri prefers using intelligence to solve problems rather than brute force. She will often choose caution and use her wit and charm talk her way out of a situation or use others to resolve a scenario quickly and quietly rather than outright violence.

Her temper has been likened to that of a firecracker over the years, but this seems to have been tempered as of late. Many attribute this change to her Husband.

Born Seriphene Andorii Silverfall, she is the eldest child of Serithon and Andorii Silverfall. Much of her childhood was spent learning and studying. She was mostly homeschooled under private tutelage until her adolescent years, where she continued her studies with the Kirin Tor in Dalaran. She spent a fair portion of her youth in the magical city, working hard to learn as much as she could while there.

In the years following her return to Quel’thalas, her talent with Transmutation, in particular, caught the attention of one of the Magisters in Silvermoon, Sanaron Dawnflare, who took her on as an apprentice. Her talents flourished under his tutelage, and the two formed a very close bond over the years.

When her apprenticeship concluded she was immediately raised to the position of Arcanist within the Magisters under her mentor, a stroke that enabled her to continue to experiment while being able to call upon his wisdom in the years to come.

Life was, at least in her mind, was perfect. But it was around this time that the disappearance of her parents shattered the young woman's world, leaving her alone with a duchy that was now her responsibility to govern. It was these responsibilities that drew her away from her position within the magisters, retreating back to Quellorian to fulfill her birthright.

The Duchess' re-emergence after returning home happened to coincide with rumors circulating about a hidden romance. Those rumors seemed to be confirmed after Seriphene was confirmed to be with child.

This ended up being a turning point for her. Having children of her own, she found a renewed purpose and began to focus on continuing the legacy of her family.

Despite her attempts to remain detached from the war, desiring to keep her people and her new family safe, fate soon forced her hand. The undead marched on Quel'thalas, drawing the elves into a conflict that forced the Duchess to send the bulk of her forces and resources to aid Silvermoon. This decision left her remaining forces stretched thin and her southern border vulnerable.

She became directly involved when Nu'elathor, the crown jewel of her family's lands, was besieged, taking the Quel'dorei who lived there off guard as it was overrun with undead. With the majority of her house sent away to reinforce Quel'thalas, the city fell in a matter of hours and she suffered another heavy loss as two of her children were killed in the assault. Seriphene was able to save her other two children, but the effort left the Duchess gravely injured.

She was forced to face the bitter reality of the situation and pulled her forces back, abandoning the city as she resolved to defend what remained of her duchy. Through a clever plan utilizing the terrain, the remainder of her forces, and arcane trickery, the remaining elves managed to survive. 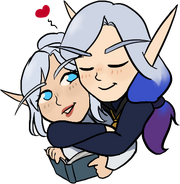 Add a photo to this gallery
Retrieved from "https://moon-guard.fandom.com/wiki/Seriphene_Vanyali?oldid=258737"
Community content is available under CC-BY-SA unless otherwise noted.