Moon Guard Wiki
Register
Don't have an account?
Sign In
Advertisement
in: Characters, Blood Elf, Dominion of the Sun,
and 4 more

"You think you can stop me? Get in line."

Lord Tendael Dawnlight II, also known by the name Setrien, is the head of the House of Dawnlight and leader of the Dominion of the Sun. Since his ascension, Setrien has gained a reputation as a ruthless firebrand and one of the central antagonists of the Grand Alliance.

Setrien was born in Evandien to Tendael and Rissade Dawnlight ten years before the first opening of the Dark Portal. During the course of his youth, Setrien possessed a reserved nature. He was educated by the finest scholars of Quel'Thalas, reinforcing a personality that was already shrewd to begin with. As early as ten years old, his father began training him in combat. Though obedient in his training, Setrien showed little interest in combat, favoring books over swords. With dark whispers of a threat rising from the south, his father would insist that his son take his training more seriously, and at the age of sixteen he was enlisted in the ranger academy.

Setrien's training at the academy was rigorous, sharpening his instincts as a fighter. Although he was decently capable with bow and arrow, he showed an impressive level of proficiency in swordsmanship. Yet, in spite of his improvements, Setrien was uncooperative with his instructors. Instead of relying on working as a team with his comrades, he often set out to accomplish objectives by himself, convinced that everyone else was holding him back. Although he was heavily criticized, Setrien eventually graduated from the academy and began the humble responsibility of patrolling the forests of Eversong Woods.

While serving the Farstriders, a romance blossomed between Setrien and a woman in his squad named Valiel Goldenleaf. The two dated for a while, enjoying the company of each other as they kept vigil over the forest. Eventually, however, their relationship began to wane once Setrien was pressured into breaking off the relationship by his father who was more concerned with his son's military responsibility. On one somber night, Setrien broke things off with Valiel, and the two went their separate ways.

It was only a few years later that Arthas Menethil invaded Quel'Thalas with the Scourge, ravaging the countryside and slaughtering the high elf population in droves. Setrien's captain was slain very early in the onset, leaving his squad in disarray. Setrien's first thought was to find Valiel. Unfortunately, he was too late. When he found her, she was on the brink of death. In her last moments she confessed that she still loved him, wracking his heart with sorrow. After she passed away, he burned her body to keep the undead from reanimating her. By then, the Scourge had reached the Sunwell, forcing Setrien and the rest of his surviving kin to go into hiding.

When Arthas departed from Quel'Thalas with the resurrected Kel'Thuzad, he left behind a detachment of his Scourge to keep the remaining elves subdued. Setrien was among many who banded together to reclaim Silvermoon and drive the Scourge back. The work, though long and arduous, was eventually completed. When Prince Kael'thas Sunstrider selected his elite forces to aid the Alliance in the south, Setrien was not among them. He spent the next few years in Quel'Thalas helping fight off the seemingly endless tide of undead. Stability in the kingdom was eventually found once again, but Setrien would never be the same. Even when the Lich King was finally vanquished at the end of the war in Northrend, his mind remained battered from the death of Valiel and mass genocide of his people.

A few years later, Setrien was shocked to receive news of his father's death. Searching for answers, he left the rangers and ventured into the world on his own. For several months, no one knew of his whereabouts. Then, one day, Setrien reappeared and announced his intention to succeed his father and become the next leader of the Dominion of the Sun.

This announcement came as a surprise to the Dominion, especially considering Setrien had no experience leading. Coincidentally, it was around this time that Volanaro Ael'aran resigned from the position of Sovereign, leaving a void in the leadership of the organization. Colius Thalaron, acting at the behest of the Dominion Eminency, decided to allow Setrien to prove his eligibility in a trial by fire. He was granted temporary authority to lead a mission in Outland. Setrien accepted the challenge, and with a small force of the Dominion under his command, he vowed to accomplish the objectives set out for him.

Setrien returned from Outland victorious, proving that he was, indeed, a commendable leader worthy of his father's name. After thorough consideration, Setrien was finally handed the reins of the Dominion. A vow was made on the day of his ascension to carry out his father's will to secure a bright and prosperous future for the sin'dorei. And so, for several years, he did.

Some years later, a necropolis called Revoltus threatened the sanctity of Quel'Thalas. Setrien was one of a number of heroes who joined the raid on Revoltus. While successful in bringing the necropolis down, Setrien went missing in action. It is widely believed that he perished when the structure crashed into the sea between the peninsula of Quel'Thalas and Sunwell Plateau, but the Dominion refuses to acknowledge his death. Nevertheless, his sister, Raethess Dawnlight, was appointed as the inheritor of his estate.

"It's never hard to distinguish the ambitious youth from the veterans of war, especially when that youth is the esteemed descendant of a national hero. Like generations before him, Setrien has inherited the traits of a Dawnlight noble: prominent cheekbones, a square jaw line, and piercing eyes that glow with unrelenting determination. With the exception of his golden, spiny hair twisted into a messy foxtail at the back of his head, he appears well-groomed, a true product of his proud lineage. Perhaps the most telling characteristic of the young warrior, however, is his austere countenance. Hardly one to express anything in the way of congeniality, Setrien's reserved demeanor is a telltale sign of the burdens inherited generations of strife."

Setrien is an athletic sin'dorei standing at six feet and two inches and weighing approximately one hundred and seventy pounds. His hair is blond and straight, just over sixteen inches in length. His skin is fairly tanned, free of any scars with the exception of a wound mark on his left shoulder where he was pierced by an arrow. His armspan is nearly six and a half feet long, allowing for versatile reach with his sword. He walks with a soldierly gait, never slouching or neglecting his posture. He speaks with an austere tone, commanding a broad vocabulary formed by affluence and education.

What Setrien may lack in experience is made up for in confidence. He is difficult to deceive, and even more difficult to coerce. When wronged or insulted, he will not hesitate to strike back. Love and care for his family and people is expressed through action, not words or gestures. Much to his detriment, he has a tendency to hold grudges, stunting his skill at negotiation or diplomacy.

Setrien's taciturn behavior is often perceived as arrogant and callous. Consequently, he lacks the charisma to influence others, relying on intimidation as a means of achieving his goals instead. He is proud and determined, refusing to let anything stand in his way once his mind is set.

Setrien's worldview is a product of war and betrayal. For an elf of his age, his attitude is quite jaded. Influenced by the ideas of his father, Setrien genuinely believes in a utopian future for his people where magic is as abundant as the limits of the imagination. Paramount to this ideal future, however, is the enforcement of justice to those who have trespassed the sin'dorei. Setrien's role, in his mind, is the arbiter of war who will end the cycle of hatred once and for all.

Setrien’s training as a ranger prepared him with a wide range of skills, making him a versatile fighter. Although he's demonstrated proficient use of the bow, he prefers close-quarters combat, especially with two-handed weapons. Setrien is nimble, following evasive maneuvers with fatal counterattacks. In addition to his martial portfolio, Setrien has an elementary understanding of magic, especially with the Light.

As a result of Colius Thalaron's tutelage, Setrien wields the Light as a force of destruction, usually manifesting in the form of holy fire. Although he prefers the Light's offensive applications, he can still use it to protect himself or heal minor wounds. Setrien generally refers to his magic as Searing Light.

Setrien's signature spell is Coruscation. With this skill he can temporarily blind his opponents with sudden bursts of intense light. This is especially useful in melee combat, as it grants him an opening to land an attack with his weapon. Caution must be practiced when using it, however, for it has the potential to cause collateral damage to allies. 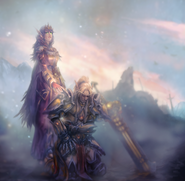 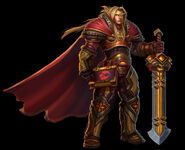 A medallion received by Setrien at the Tournament of Ages

A certificate received by Setrien at the Tournament of Ages
Community content is available under CC-BY-SA unless otherwise noted.
Advertisement