The Barony of Zollern

The Barony of Zollern is the ancestral lands of House Hillegas, a minor noble family that owes allegiance to the Kingdom of Lordaeron. The barony itself is meager, with barely more than six-hundred total denizens underneath House Hillegas' rule. It was said to be one of the first landing points of the Vrykul that came to Tirisfal Glades, and has been settled by ancestors to House Hillegas ever since.

The people of the Barony of Zollern are a dull lot. Most of the time the serfs and common folk are working the lands and providing for their families, not having much time to welcome visitors that insist upon making a trek out to the isolated barony. However, once the work for the day's shifts have ended, the people are actually rather friendly and warm. The communities are close knit and everyone is practically family to one another.

With the prevailing warrior's culture surrounding House Hillegas, strong bonds of brotherhood are shared by the men of the Barony, as they will often serve together on the battlefield. Strong drinks from warm taverns are aplenty in Zollern, for hard men like hard drinks. An emphasis on having a jovial 'family' time and relaxation period, as well as having a strong and strict work ethic are paramount in the Barony, for what is work without play?

Some residents can be considered superstitious, with the older generations still clinging to Lordaeronian Paganism that was brought about by the original Vrykul and their Northern ways. However, most citizens believe in the Church of the Holy Light.

Sigismund's Day - January Sixth. It is a day of celebration of Baron Sigismund Hillegas' achievements for the Barony of Zollern and his life.

Carnival - February Sixteenth. A two-day carnival of festivities. including parades, with heavy drinking that is celebrated once a year annually.

Novemberfest - November First. A month-long celebration of the successes of the Barony of Zollern where families can get together and relax, play games, travel, drink and overall have fun.

The Barony exports large quantities and varieties of lumber for profit from its vast forests. It has little farmland for harvesting crops, so the Barony relies on importing fresh meats from nearby lands or, if needed, by ship. The Barony has access to ores from the nearby mountains, and it will occasionally trade with the neighboring lands it's seafood and lumber for trade routes to gain these metals. Tariffs on shipping have both helped and hindered House Hillegas. They enjoy a steady stream of income from selling off their exported lumber and few crops, but House Hillegas' importation of meats and varietal produce will occasionally exceed the influx of currency.

Seafood from the coast and venison from the forests are staples in the communities of the Barony. The few crops they managed to grow in the surrounding villages were corn and wheat, as well as potatoes. Foraging parties would find other sources of food from the plentiful forests, such as wild herbs and spices, berries, mushrooms and other safe-to-consume foodstuffs. However, most fruits and vegetables were imported.

The Barony of Zollern was founded sometime before the year 500 K.C., as the Kingdom of Lordaeron had well been established by this point, and the First War had not yet occurred. It was created when the ruling house of Lordaeron, House Menethil, granted Sigismund Hillegas with the lands of the soon-to-be Barony, and he founded the town of Starkfeste, and soon after, the lighthouse at Victor's Point.

Destruction of Victor's Point and Siege of Starkfeste

The port was destroyed during the Second War by the Orcish Horde. House Hillegas had never before fought an empowered foe such as the Orcs from the Dark Portal. A surprise attack was launched on Victor's Point, setting up a staging point for the Horde to storm the shore. The Orcs set upon Starkfeste in an attempt to pillage and destroy the capital of the Barony of Zollern, but the rulers of House Hillegas made Starkfeste into a fortified city, and withstood the siege for a fortnight before repelling the beleaguered attackers.

Fall of the Barony of Zollern

During the Scourging of Lordaeron, the far-off and small Barony of Zollern was easily cut off and surrounded by the innumerable waves of the Undead Scourge. Many denizens of the land fell in battle or slaughter only to be risen from the grave to attack their friends and loved ones. It was here that House Hillegas rallied more than half their remaining and able-bodied Men to stand against the Scourge while the rest fled to the port to safety, and where Burchard Hillegas' father, and those valiant defenders, fell to the Scourge. The Barony of Zollern was considered lost, and has never been occupied by an Alliance member since.

The Barony of Zollern is a shallow husk of what it once was, a ruin to be coveted by the remains of House Hillegas. It sits, molested by time and untouched by the Alliance forces as they attempt to reclaim the lands that made up the former Kingdom of Lordaeron. Foul Forsaken, demonic Orcs and other monstrous Horde races defile the lands once inhabited by the likes of Burchard Hillegas' family. The former residents and their next generation are currently struggling to reclaim these lands, fighting against whomever resists in their efforts as they attempt to rally support and garner enough supplies and wages to complete such an endeavor.

Starkfeste is the capital of the Barony of Zollern. It was founded by Sigismund Hillegas himself, and made into a fortified city on the peninsula that jutted off of the southwestern coast of Tirisfal Glades. It has strong walls and connection to a port not far from it's walls where the majority of it's imports from other Kingdoms comes from. Members of House Hillegas resides primarily in Hillegas Manor, the ancestral seat of power both House Hillegas and the Barony of Zollern.

The second settlement founded by Sigismund the Good, Victor's Point is a lighthouse and lighthouse keeper station just off the coast of southwestern Tirisfal Glades in the Barony of Zollern. Victor's Point has successfully guided ships into the Barony from afar and kept trade and travel alive for generations. It is populated by a small group of lighthouse keepers, and a tiny garrison of troops to monitor any incoming attackers. It is the namesake of Sigismund's son, Victor Hillegas, who would go on to lead the House after his father's death.

Rotholz is a logging camp, and is one of the primary exporters for the Barony of Zollern. Being in a forested area, House Hillegas became a large exporter of lumber of many varieties. Although not heavily defended nor surrounded by housing, the logging center has become flush with workers who come from all over the Barony, and it is one of the main job suppliers.

House Hillegas rules the Barony of Zollern, from the capital of Starkfeste and the seat of Hillegas Manor. It is known for its breed of strong, tall men who are powerful warriors on the field of battle. Sigismund himself, the founder of House Hillegas, was said to be seven feet tall. A rumor spread among the common folk is that the House Hillegas, for remaining in this place for so long, still has strong traces of Vrykul blood in their lineage, giving them a unique difference in comparison to other Human stock.

House Aarden is a vassal house of House Hillegas, and have existed almost as long as House Hillegas have ruled over the Barony of Zollern. On the surface, they are a small and loyal house, richer than most of the serfs that make up the bulk of the work force. They have come to House Hillegas' calls for aid in times of strife and provide an adequate tithe of loyalty. However, unbeknownst to all, House Aarden secretly schemes against the ruling House, and seeks to usurp the Barony of Zollern for themselves and proclaim rulership for their own people in Lordaeron. 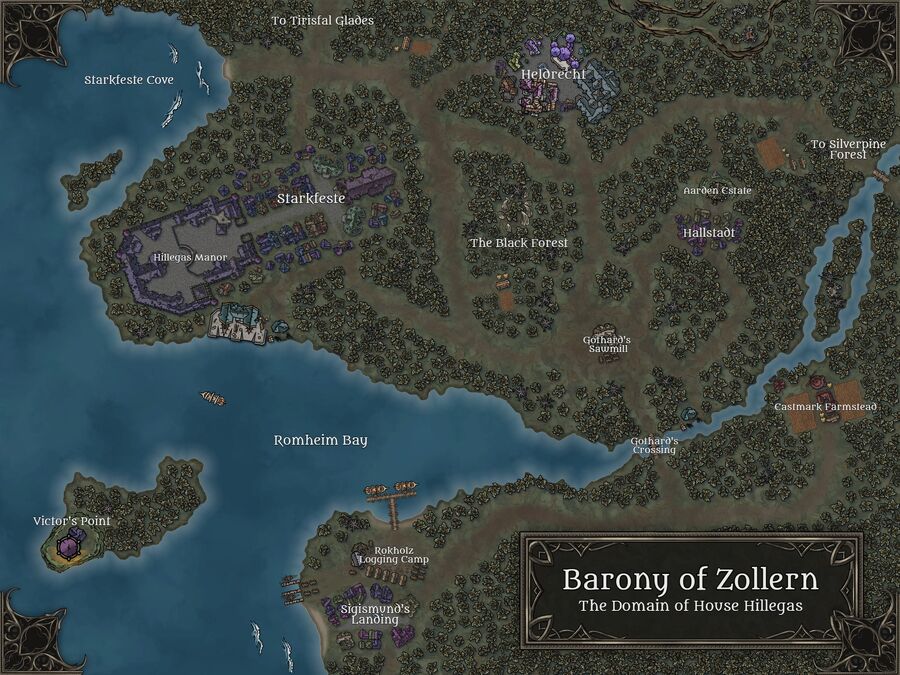 The official map of Zollern. (Created by Candalorian)

Burchard, primary claimant to the Barony of Zollern. (Art by Tearcry08)
Community content is available under CC-BY-SA unless otherwise noted.
Advertisement