Trebor (Also known as The Fallen Hero of the Horde) was a First Sergeant of the New Horde and veteran of the First, Second, and Third Wars. His twisted, yet altruistic spirit stands beside the road leading out of the Swamp of Sorrows and warns travelers of the dangers of the Blasted Lands, which consumed him and his men.

After a disastrous expedition to the Blasted Lands, he was tortured, and ultimately killed.

The hero was a warrior of the Horde named Trebor, who was specifically chosen to travel to the Blasted Lands with a group of assembled men.

There, he learned firsthand of its horrors. The Burning Legion had amassed massive forces within the Blasted Lands. Hurriedly, Trelbor sent a scout back to Stonard with this information.

Warchief Thrall sent orders back to Trelbor, calling for an immediate retreat to Orgimmar, however, the orders were intercepted by an ambush of murlocs led by the Swamp Talker. After weeks of waiting for orders that never came, Trebor moved into the Blasted Lands to investigate; this proved to be unwise, as his troops were captured by the demonlord Razelikh the Defiler and his henchmen.

His lieutenant, Kirith, was tortured along with Trebor himself. They would

alternate between the two, torturing one while the other watched.

During a lull in the activity of an especially brutal day, Kirith told Trebor what had happened to the rest of his regiment, and a plan he had been formulating to free them from their masters. Soon afterwards, Trebor and Kirith managed to kill a few of their captors, but were soon overwhelmed. Trebor escaped, but only sounds he could hear were the screams of his soldiers and the rapid beat of his own heart. A short while later, Sergeant Trebor returned to the Blasted Lands in hopes of rescuing his men and restoring his honor. Instead he was once more captured and beaten until dead. Deep within Serpent's Coil, the souls of Trebor's regiment were used in experiments by the Death Knight Ilifar. Lieutenant Kirith's soul was twisted and horribly corrupted, and the rest had their souls ripped from their bodies, their husks serving as slaves to Razelikh and his underlings.

However, Trebor's soul remained, bound only by the weight of his honor, and his unwavering commitment to free his enslaved men and finish the mission he never received. The wise spirit of Trebor became known to visitors of all factions as the Fallen Hero of the Horde, and passed knowledge of both the Blasted Lands, and the way of the sword to those willing to fight his demonic nemesis.

After the freeing of his men, and the subsequent banishment of Razelikh, much of his conrades, including Kirith, have been able to move on in peace. However, Trebor remains vigilant of the Blasted Lands, and the Dark Portal beyond, often reminding passers by of the dangers ahead.

It has become a tradition of sorts for warriors to visit the spirit and pay tribute, proving their strength. If one is exceptionally talented, they might receive one of Trebor's treasures in return. Sir Aemon Bayne, after slaying the ogre Grol, was given an enchanted flask of Diamond, mined from the walls of Oshu'gun.

It is rumored that some of his other treasures may include an Wildhammer Berzerker's Plate Crown and a pair of plate spaulders razor sharp to the touch. 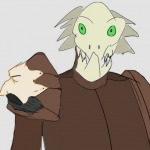