Moon Guard Wiki
Register
Don't have an account?
Sign In
Advertisement
in: Characters, Deceased, House of Wrynn,
and 6 more

King Varian Wrynn was the ruler of the Kingdom of Stormwind and High King of the Alliance. He was slain fighting for the Grand Alliance on the Broken Shore. His son, former-Prince Anduin Llane Wrynn is his successor.

After surviving the harrowing destruction of his homeland in the First War, Varian spearheaded the reconstruction of Stormwind and married Tiffin Ellerian, with whom he fathered Anduin Llane Wrynn. When his wife was killed during the Stonemason Riots, he fell into a great depression.

Varian's situation was worsened further when he was captured by the Defias Brotherhood while enroute to a diplomatic meeting with the New Horde. After a shipwreck left him marooned in Kalimdor, he was captured by orcs and sold as a slave to fight as a gladiator in Orgrimmar's Crimson Ring. Varian escaped with the aid of a number of freed pit-fighters turned adventurers. After bringing those responsible for his kidnapping to justice, he eventually returned to Stormwind City and secured his rightful place as King.

War with the Lich King

Shortly after Varian's return to Stormwind, the Lich King launched several Scourge Invasions throughout Azeroth. Meeting the challenge head-on, King Varian led the Grand Alliance to war against the scourge in Northrend. Upon the betrayal at Angrathar, the Wrathgate, Varian declared war upon the Horde and launched an invasion of the Undercity. Lady Jaina Proudmoore, a proponent of peace between the Alliance and Horde, teleported the Alliance forces out of the Undercity before Varian and Thrall could exchange blows. Continuing the war in Northrend, Varian begrudgingly worked alongside the Horde through the defeat of the Lich King at Icecrown Citadel.

In the time after the war with the Lich King, Varian led a massive buildup and fortification of Stormwind's holdings - reclaiming what was lost during the corruption under Lady Prestor. Westfall was retaken by force by the Westfall Brigade and the remnants of the Defias Brotherhood were stamped out.

When Deathwing erupted from the earth and torched Stormwind, King Varian vengefully led the charge to hunt down both the Twilight Cult responsible for the destruction and the Horde that took advantage of his crippled allies. He personally led a strike force to liberate Ironforge from Moria Bronzebeard after her father's petrification, aiding in the founding of the Council of Three Hammers.

War with the Horde

After Deathwing's defeat at the hands of adventurers, King Varian focused his efforts towards the war against the Horde. The destruction of Theramore and the discovery of the continent of Pandaria prompted the Alliance to re-examine King Varian's role as its leader; with many considering him worthy to be crowned High King of the Grand Alliance.

Battle of the Broken Shore 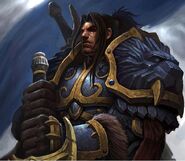