Velasandra Ravensinger is a Kaldorei priestess who is part of the Order of the Eternal Blade, Dor'Serrar. She spends much time looking for medicinal herbs in the wilds and tending to the sick and injured. On occassion, she can be found leading a group of sentinels against the enemies of the Kaldorei and Elune.

Currently, she's in the Stonetalon Mountains with other members of Dor'Serrar.

Velasandra is a young Kaldorei of average height. She appears to be slim and from what light purple skin that can be seen also appears to have a little bit of muscle. She has a pretty face with red markings above and below her eyes and just a hint of cosmetics. Her dark blue hair is medium length and loosely braided with many wispy strands escaping the braid. Every so often she brushes loose strands away from her face.

On her belt she has multiple potions, pouches and small bags attached where she keeps her coin and other things she likes to keep within reach. Her expression is usually stoic, her eyes observing her surroundings constantly. She smiles easily and freely around friends, animals and children.

When not in the field and not wearing her Priestess garb, Velasandra prefers to wear various different dresses, depending on the occasion. Shorter sleeves and comfortable fabric for everyday wear while for more formal events she prefers to wear fancy dresses with long, elegant sleeves.

Her armor of choice is a lightly armored leather tunic, pants, boots and gloves. When in the field, she always wears a belt with pouches of bandages and medicinal herbs attached and various healing potions hanging from straps on the belt. Her favorite weapon is a sturdy staff that she uses both to channel her magic and to melee with. She keeps a dagger either in her boot or strapped to her thigh most of the time.

Constantly observing the people around her, Velasandra is kind to fellow Kaldorei and people she knows. A bit on the quiet side and cautious, she's wary of the other Alliance races, despite knowing they're allies. For Velasandra, the most important things are Elune and protecting her people.

She has a strong, almost overwhelming hatred of the horde, demons, fel-magic and fel-magic users.

Born in Ashenvale to Priestess Mycina Dawnbow and Nightblade Jaris Ravensinger, Velasandra had a typical, happy elven childhood of climbing trees and running through ponds. After her mother healed her from the brink of death after falling out of a tree as a child, Velasandra's interest in healing and the Sisterhood had been caught. As a teenager Jaris taught his daughter the basics of fighting with daggers, but Vela was forced to choose between training with the Sisterhood or training with her father and chose the Sisterhood.

By the time the Third War started, Velasandra was a Priestess that excelled at healing and temple work. She joined the defense of Ashenvale, staying at the back lines while she healed allies and occasionally smited an enemy. As the Kaldorei military was pushed to Mount Hyjal, Vela went with them, continuing her work as a field healer. It was on Hyjal she saw orcs for the first time as Cenarious and the Nightblades were overrun and killed by them, her father losing his life in that battle. Her mother, along with other Battle Priestesses and Sentinels, lost their lives shortly after. Velasandra's hatred of the Horde and everything demonic and fel is caused directly by everything she lost in the third war to them.

When the new Kaldorei capital of Darnassus was built, Vela moved up to Teldrassil to continue her duties as a Priestess in the Temple of the Moon and the city in general. She was saddened, but content for years until the Horde began pushing into Ashenvale. When the news reached Darnassus, Velasandra rushed to the forests she grew up in, assisting in pushing the Horde back in any way she could until they were victorious. With the orcs pushed out of her home, she continued to spend all of her time in either Ashenvale or Darnassus.

When the Dark Portal opened once more and the news of everything happening with and on Draenor broke, Velasandra grew restless, feeling the need to do something other than sit in a temple all day. Within months she had found the Order of the Eternal Blade, Dor'Serrar and was joining their ranks as a healer. She quickly went up the ranks due to her initiative and willingness to help and within weeks had gained enough confidence to lead groups into battle against their enemies, although she still stayed in the back to heal the injured.

Not long after, the campaign on Draenor ended and life briefly returned to normal until the Burning Legion began their third invasion of Azeroth. All of her hate for the Legion came boiling to the surface when she saw her first demon in over a decade, pushing her to wield and fight with a blade for the first time in centuries.

For the past year, Velasandra has been fighting against the Legion alongside her fellow members of Dor'Serrar. As she had never officially completed her Priestess training due to the Third War and the chaos that followed, Elder Priestess Astahra Moonwhisper has taken Vela on as her Thero'shan in recent months. Astahra is teaching her ancient prayers, blessings, combat and leadership. Vela is eager to learn everything her Shan'do has to teach her.

A rare emerald hippogryph, Velasandra found and befriended Hope shortly before the Legion began invading Azeroth this most recent time. Standing tall and proud, Hope was named for what Vela needed most at the time after hearing of the return of the Legion. She has extreme loyalty to her Mistress and will carry her anywhere they're needed.

A frostsaber cat that Velasandra received from the Sisterhood several years ago as a cub and trained herself. Snow does not like to stand in one place for long, when they're not on the move she frequently stretches or paces. 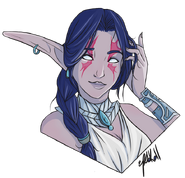